You are at:Home»Current in Zionsville»Zionsville Cover Stories»Looking Back: How three town leaders impacted the community

Zionsville’s mayor and two town councilors were able to publicly thank the community — and each other — for their years of service as they prepare for life beyond their political positions.

Zionsville Mayor Tim Haak will see Democratic Party mayor-elect Emily Styron become the town’s new mayor at the start of 2020. Haak was elected as the town’s first mayor four years ago and served on the town council beginning in 2008.

Collectively, Suarez, Hopper and Haak helped spearhead some of the town’s largest accomplishments of the past decade.

The town noted a need to bolster its limited commercial tax revenue, starting as early as 2008. By 2018, two years ahead of Haak’s goal, the town achieved an 80-20 percentage ratio of residential-to-commercial property tax revenue.

Suarez said the move was “going to be an answer to keeping Main Street vibrant, getting the right mix of businesses down there so that we could have that attractiveness and charm continue there, yet give the services and the safety and quality roads and schools.”

The three town leaders also were instrumental in construction of the Zionsville Municipal Services Building, which Haak called “a modern building for a modern community.”

The town also built South Village, a cluster of boutique shops and restaurants, and Creekside Corporate Park, an office park where corporate headquarters and office buildings are nestled near woodlands. The town also built a fire station and added more than 100 acres of parkland in the last eight years.

Haak said he gained two new friends in Suarez and Hopper and thanked them for becoming confidants during his term as mayor.

Council President Josh Garrett, who was elected to the council in 2015, said the group was able to accomplish even more in the last four years.

Town leaders are overseeing the Holliday Farms development as it nears completion The project includes construction of $1million homes, an 18-hole golf course and a 9-hole golf course, among other amenities.

During the same time period, zWorks, a communal workspace that helps foster entrepreneurship, opened its doors. And in a joint move between the Zionsville Police Dept., the Boone County Sheriff’s Office and Zionsville Community Schools, the town launched an inititative to have a school resource officer in every Zionsville school.

Hopper said she hopes that the departing city leaders left the council and the town “better than we found it.”

Suarez and Hopper are particularly proud of the legacy they leave behind. They were the first female town council presidents in Zionsville. Suarez served as president in 2016. Hopper’s term was in 2017.

“That, I think, sets the knowledge and the standard out there for young girls who come out and sit here and know that they, too, can have these positions,” Suarez said. “That, to me, is a lasting legacy that I’m very proud of, and that’s something I hope is replicated in councils to come.” 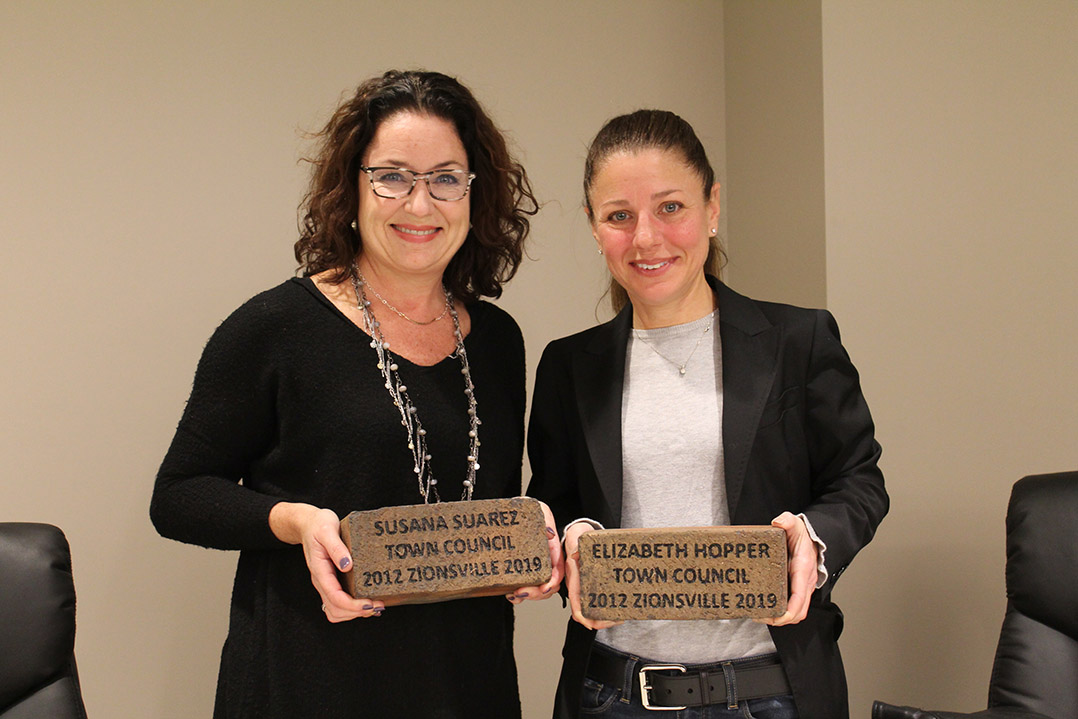 During his first year as mayor of Zionsville, Tim Haak committed the town to a goal established by the town council in 2008: To achieve an 80-20 percentage ratio of residential-to-commercial property tax revenue by 2020.

In 2008, Zionsville’s property tax base was 95 percent residential, and town officials knew the figure was not sustainable in the long-term. It burdened taxpayers with paying for town services at a rate much higher than neighboring municipalities.

The town had a goal of diversifying the tax base to 80 percent residential, and 20 percent comprised of commercial, retail and agricultural entities, relieving taxpayers of a substantial burden. In 2018, Zionsville achieved the objective two years ahead of schedule.

Town councilor Susana Suarez, who will relinquish her seat at the start of 2020, said reaching the goal helped Zionsville “keep the tax base vibrant and the town vibrant.”