You are at:Home»Current in Zionsville»Zionsville Community»Council swears in new member 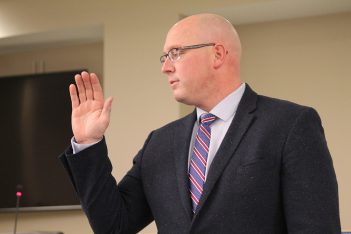 Craig Melton is sworn in as a town councilor at the Zionsville Town Council’s Dec. 2 meeting.

Melton, a Republican, was elected with 61 percent of the 1,069 votes cast during the Nov. 6 general election. He defeated Democratic candidate Tim Ottinger.

“I’m very humbled to be elected at the percentage that I was,” Melton said. “That means a lot to me, and I want to continue to do right not only by the people that voted for me, but for the people that didn’t vote for me as well.”

Melton served on the Royal Run neighborhood’s homeowner association before entering the council race. He developed an interest in local politics while serving on the HOA, regularly attending town council meetings beginning in 2014.

Melton familiarized himself with the duties councilors are tasked with, such as voting for or against major projects and infrastructure improvements that affect community growth, land use, town finances and strategic planning.

Melton said he wants to assist constituents on the western side of Zionsville by partnering with Whitestown for joint projects that would benefit residents in both communities. One such project, the Big 4 Rail Trail, is nearing completion. The trail, which has seen Zionsville work in conjunction with Whitestown, Lebanon and Thorntown, will stretch from northern Indianapolis to Lafayette.

“They are coming, and I don’t want to act like I came up with the idea and all of a sudden we’re going to get this done,” he said. “But the reality is that these roundabouts are very important to our society as a whole, our constituents, our people.”

A father of four, Melton said he wants to make a positive impact on the community that will benefit all Zionsville residents, present and future.

“I represent my district, but I will also do my best to represent Zionsville as a whole,” Melton said.