Ron Carter has seen a lot in 24 years on the Carmel city council.

When he took office in 1996 – the same year as Mayor Jim Brainard – Carmel was a city of less than 40,000 residents, the Monon was still a railroad track and the city didn’t have a single roundabout. 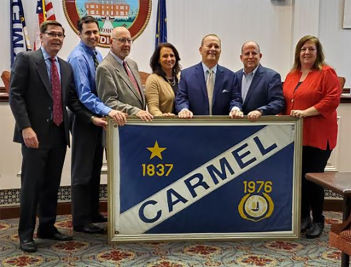 At the Dec. 16 Carmel city council meeting – Carter’s last – his fellow councilors said many of the city’s improvements in the last quarter century can be attributed to Carter’s vision and leadership.

“Regardless of the time of day, the subject at hand or the obstacles involved, Ron was always thinking about how to make something better than it was with all of the citizens of Carmel in mind,” said council president Jeff Worrell, who described Carter as the council’s “idea man.”

Carter’s term on the council expires at the end of 2019. He lost a four-candidate race for three at-large seats on the council in the May Republican primary.

At the meeting, Carter thanked those who supported him during his time in politics and shared his top achievements and biggest disappointments during his time on the council.

Among his proudest accomplishments are the creation and growth of the Carmel Farmers Market, reconstruction of Keystone Parkway, transition of Carmel to a second-class city and creation of the Monon Greenway.

“The city would not have developed as it has without the Monon as the catalyst,” said Carter, who was a founding member of the Monon Greenway Committee.

He listed several disappointments, including the final design of U.S.-31. He said the Indiana Dept. of Transportation didn’t listen to Carmel’s guidance and recommendations to keep the reconstructed highway from becoming a physical, social and economic barrier between the city’s east and west sides.

“It is like the stretch of I-65 that has dissected for a half-century the old north side of Indianapolis,” he said. “That experience has provided a cautionary tale about working with INDOT.”

He also is disappointed that a 2017 proposal by Brainard to purchase an antique carousel for the city wasn’t approved by the council.

“The idea was introduced and presented so poorly that it became a symbol,” Carter said. “It would’ve been a great magnet for that end of town.”

Carter offered some words of wisdom for the incoming council members, who will be sworn in Dec. 18. He said that approximately 15 percent of the population is against “virtually anything” the council tries to do.

“They are the people that you are never going to convince of anything, so don’t cater to them,” he said.

Each city councilor thanked Carter for his dedication to the city before approving a resolution expressing appreciation for his 24 years of service to the city.

“I’ve seen councilor Carter make important decisions that have taken Carmel from a great place to live to one of the very best places to live,” said councilor Bruce Kimball, who was re-elected in November for a second term. “I look forward to following in his footsteps to continue that vision.”

Councilor Kevin “Woody” Rider served with Carter on the council for 12 years.