You are at:Home»Current in Fishers»Fishers Community»Councilors split on apartments, continue proposal

After discussion on the proposed Woods of Britton Phase 2 at the Dec. 16 Fishers City Council, councilors and the petitioner agreed to revisit the proposal at a later date.

The Woods of Britton Phase 2 proposed a rezone at the southeast quadrant of 141st Street and Ind. 37 to change 5.3 acres from mixed use to multi-family development. 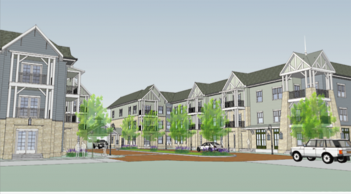 A rendering of the proposed Woods of Britton Phase 2 apartments. (Submitted rendering)

If approved, the rezone would allow for the second phase of the Woods of Britton apartment complexes and would include two new buildings with 128 units, a gym, parking and a private road to connect the new section with the existing apartment complex.

Several councilors were hesitant about approving the plan because of Ind. 37 construction.

“That’s an economic corridor right there,” councilor Todd Zimmerman said. “I might not be opposed to this down the road once 37 is done and sits there and no commercial development comes, but I think it’s short-sighted to stop at apartments right now as the decision before we see this full-length development of 37. I think this is a vital economic corridor for us, and I don’t think this is the right time to do this, so I’ll be opposed.”

The proposed apartments would be a $17 million development, and petitioner Steve Hardin, a partner with Faegre Baker Daniels, said 25 percent of the residents in the existing Woods of Britton apartments are 65 and older. He also noted that if apartments are built on the site instead of a commercial development, they will increase the assessed value and improve traffic flow.

“You can’t add apartments in a restricted access area and say you’re relieving traffic. That can’t happen,” Zimmerman said. “If it wasn’t right on 37, I have no problem with the project concept, but we have one chance of developing the 37 corridor, and I just think it’s a miss this early on before we see what 37 does to just go to apartments.”

Other councilors supported the project. Councilor Brad DeReamer said he no retail development could build on the lot and succeed because of difficult access to the area.

“(The petitioner) is not asking for an abatement or anything else. He hasn’t asked for a dime,” DeReamer said. “Twenty-five percent (of residents) over 65, we don’t cause a lot of traffic. We sit around and play bocce. I really appreciate that because we all know over 20 percent of Fishers is over 65, and that is just going to keep increasing. You probably won’t have any trouble filling that up, probably with seniors over anything else.”

After hearing feedback from councilors, Hardin asked for a continuance to reassess the development and return to council at a later date. The continuance was unanimously approved.
For more, visit fishers.in.us.