You are at:Home»Current in Westfield»Westfield Community»Connor on mission to raise awareness about scoliosis

Following Keegan Connor’s successful appearance in the preteen division of the National All-American Miss competition Nov. 23 to Dec. 1 in Los Angeles, she had little time to celebrate. 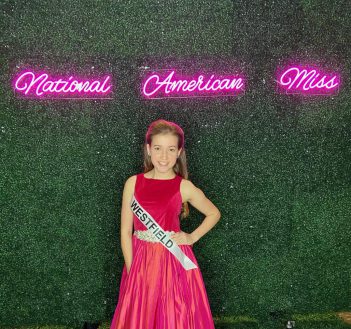 The Westfield Middle School eighth-grader returned to Westfield for one day before heading to New York to have a new type of spine surgery Dec. 4 to help correct her diagnosis of severe scoliosis, a curvature of the spine, earlier this year.

Connor, 13, went to New York to have the Vertebral Body Tethering, which was approved this year.

“It wasn’t FDA-approved until late August, and no one in Indiana does it. There are probably only 15 surgeons in the world who do this procedure,” her mother Sheryl Matthys said.

The surgery uses a tether rather than two steel rods, thereby maintaining flexibility in the spine. It is a preferred option for kids still growing.

“I was very happy with how the surgery came out,” Connor said. “It will definitely help me in the future as well.”

Matthys said her daughter had some back pain before the scoliosis was detected.

Connor is trying to raise awareness about idiopathic scoliosis, which primarily strikes girls between the ages of 10 and 14. She has a platform called KeeganCares.com.

At the nationals, Connor earned first runner-up for Music Artist of the Year and also placed in the top five for actress, talent, best resume and red carpet correspondent. She was second runner-up for both music artist and spokesperson in 2018 and was top 10 in talent.

“I made a lot of improvement in actress and talent and music artist, especially the singing categories,” Connor said. “I’ve gained a lot since last year and have gained more confidence to go out on the stage and perform.”

Connor, who is undergoing physical therapy, will likely be able to return to school in mid-January.