Bolt for the Heart donated 45 automated external defibrillators, or AEDs, to the Westfield Police Dept. during a Dec. 4 a press conference. Bolt for the Heart, its eighth year, is an annual 5K race on Thanksgiving Day.

The donation allows for each WPD patrol car to be equipped with an AED. Prior to the donation, only one or two patrol cars per shift had an AED. 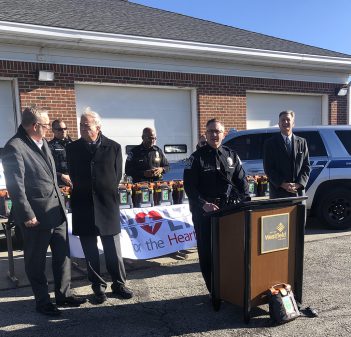 “Sudden cardiac arrest is the leading cause of preventable deaths, and there’s almost 1,000 people killed daily in the U.S.,” WPD Chief Joel Rush said. “The survival rate is 11 percent. That’s one of the things we are trying to fix with what we’re doing today.”

Rush called the donation a “game-changer.”

“With this generous gift, we will be able to put an AED in every one of our patrol cars. Quick response is critical in cardiac arrest,” he said.

“It’s done a nice projection upward,” he said. “The important thing is the community is embracing what we are doing, which is placing AEDs in the hands of first responders.”

Since its inception, Bolt for the Heart has purchased Cardiac Science AEDs. Each cost between $1,200 and $1,800. The original initiative was to equip every state trooper with an AED, and it then grew to equipping municipal departments with the devices. With the Westfield donation, Twer said all Hamilton County police departments AEDs for all their vehicles.