You are at:Home»Current in Noblesville»Noblesville Community»Council to consider two residential developments

At its Dec. 3 meeting, the Noblesville Common Council heard an introduction for two ordinances asking for a change of zoning to allow for residential properties.

The first was a change of zoning for approximately 21.84 acres at 11002 E. 166th St. in Noblesville Township. The proposal is for the Stony Bluffs neighborhood. 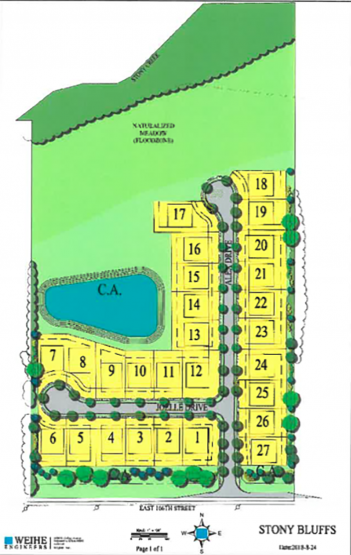 The proposal first appeared before the council a year ago, but it returned with some changes.

“Originally, it came through proposed as a custom home subdivision, but the developer has found a builder who would like to build in this neighborhood,” senior planner Denise Aschleman said. “Drees Homes would be the builder.”

The framework of the request remains the same, although the petitioner is removing a portion from the flood plain.

“They are removing a portion of the proposal from the flood plain because currently, the flood line runs through the last four lots,” Aschleman said. “They still plan to have more than half the properties remain in the flood plain.”

The second change of zoning request was for 17.87 acres in the southwest quadrant of Little Chicago Road and 191st Street for a development called Shafer Woods.

The request is for 31 new home lots, for a total of 32 lots because one house that is currently on the property will remain. The development calls for a small structure to house any activities, games or other events conducted by the development. There also will be a firepit, a dry detention area and a landscape buffer.

Because the proposals were introductions, no vote was taken by the council. For more, visit cityofnoblesville.org.