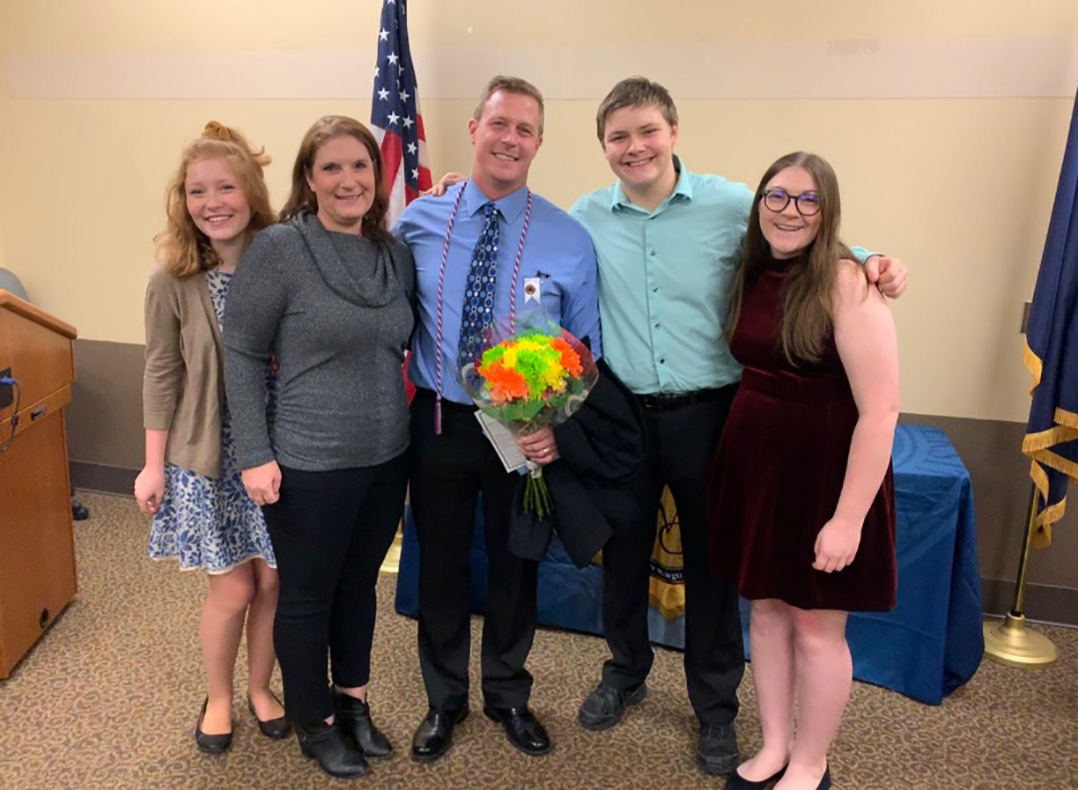 Andrew Nagel, second from right, joined by his family at the Nov. 8 pinning ceremony at WGU. From left, Trisha, Madison, Samuel and Reagan Nagel. (Submitted photo)

A Carmel veteran who spent 22 years as a combat medic is continuing to give back to those here at home at the Indianapolis VA Hospital.

“As I neared retirement from the (United States Army Reserves), I knew the one thing I’d miss the most was the comradery that’s shared between those that have worn the uniform,” Andrew Nagel said. “As such, I felt working with the veteran population at the Indianapolis VA would be a great way to help fill that impending void. I’m thankful to report that my decision has been a terrific one for me and I still feel very much a part of the military community.”

Nagel achieved another long-term goal in November in his mission to give back when he received his bachelor’s degree in nursing from WGU Indiana.

“Some 18 years ago I became a licensed practical nurse, and shortly thereafter began my aspirations to go on to become a registered nurse. But, as can happen, life took a few winding turns along the way,” Nagel said. “So, here I am, at 43 years old finally getting this thing done. It’s definitely a case of better late than never.”

With a wife, three children and a full-time job, he knew it would be difficult. He started his first term at WGU in May 2017 carrying a full load of classes.

“My wife accepted that I would miss family vacations, out-of-state birthdays, holiday get-togethers and even some funerals, sadly,” Nagel said. “And, I had an amazing supervisor who allowed me to use my vacation time when I needed to take time off for clinicals. Often, the requests for time off came with short notice as clinical schedules are sometimes not posted more than one to two weeks before they start.”

Nagel said continuing to serve his fellow veterans as an RN is an “immense honor that comes with a high degree or responsibility.”

“I love the work I do providing care for my veterans,” he said. “I’m lucky in that I can walk into any room or home of one of my veterans, and even though we may come from backgrounds that are a million miles apart, we still can share that comradery and our experiences within the United States military. That really helps when building trust and cementing the nurse/patient bond. I’m bound and determined never to take any of it for granted.”