You are at:Home»Current in Zionsville»Zionsville Cover Stories»Help for the highway: Federal grant to help fund I-65 project

U.S. Sens. Todd Young (R-Ind.) and Mike Braun (R-Ind.) recently announced that the Indiana Dept. of Transportation will be awarded a $16 million grant for an upcoming I-65 project in Boone County.

Funds for the I-65 Mobility and Access Project will be allocated through a Better Utilizing Investments to Leverage Development Grant from the U.S. Dept. of Transportation. 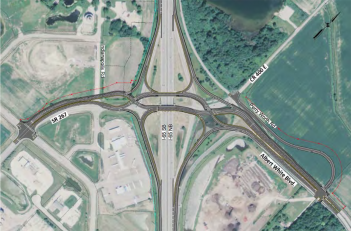 After the projects completion, C.R. 550 S and Ind. 267 will be diverging diamond interchanges. (Submitted renderings)

The project aims to address community needs for modernized transportation infrastructure by constructing an additional interchange at C.R. 550 S. and modifying three I-65 interchanges in Boone County.

In previous years, officials determined a new C.R. 550 S. interchange had merit and would significantly benefit the Ind. 267 and Whitestown Parkway interchanges by alleviating traffic congestion and improving safety in the main outlets of rapidly growing Whitestown.

“As the Crossroads of America, it is critical to have a reliable and safe transportation corridor in Indiana for the continuous movement of people and goods,” Young stated in a media release. “As the primary artery between Indianapolis and Chicago, improvements along I-65 will ensure Boone County remains a regional logistics hub and has the capacity for continued economic growth.”

“Indiana moves American business, and for us to continue serving as the Crossroads of America we need to constantly improve our roads, bridges, and interchanges,” Braun stated. “This grant from the U.S. Department of Transportation will allow Whitestown to continue to flourish, and Indiana’s infrastructure to keep connecting Hoosier businesses to the world.” 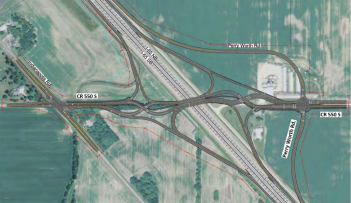 After the projects completion, C.R. 550 S and Ind. 267 will be diverging diamond interchanges. (Submitted renderings)

The contract will open for bids in March 2020, Calder said, and the winning contractor will likely start construction in the spring. Ground will break on the new interchange at C.R. 550 S. first, and Whitestown Town Manager Jason Lawson said modifications on other interchanges surrounding the site would happen when the first project is complete.

The project is slated for a two-year construction season, which will allow for the entirety of the project to be finished, though that doesn’t mean the project will last the full two years.

In 2019, the Indiana Business Research Center at the Indiana University Kelley School of Business deemed Whitestown Indiana’s fastest-growing municipality for the eighth consecutive year. According to the research center, Whitestown’s population has nearly tripled from 3,132 residents in 2010 to 8,627 in 2018, with more growth on the way.

“On behalf of the town council, we are excited for this project for our residents,” Lawson said. “I think it’s going to be great for economic development. Obviously, getting a new interchange brings a lot more opportunities, so we are in the early planning stages of that right now, and I think things will start developing as soon as it breaks ground.”

ANATOMY OF A DIVERGING DIAMOND INTERCHANGE

Boone County motorists will have to adjust to a new type of interchange on I-65 in a few years.

The project is designed to improve safety, add traffic capacity and relieve congestion for the current and future needs of Whitestown and Boone County as development expands in the area.

A diverging diamond interchange is a type of interchange where two directions of traffic snake to the opposite sides of a bridge, creating an “X” shape, before passing back to the customary side at another “X” crossover. The configuration creates a smoother flow of traffic where drivers can exit on or off the interstate without hitting as many stop lights. But it is unusual in that it requires traffic on the highway overpass to briefly drive on the opposite side of the road.

“The interchanges are designed to be safer, more efficient and more cost-effective than traditional diamond interchanges,” INDOT Communications Director Debbie Calder stated in an email.