For Jessamyn Anderson, singing with the Indiana Wind Symphony at Christmas has been special.

“The Palladium isn’t a shabby hometown venue to return to,” she said. “This is my ninth season as a soprano soloist with the IWS, and this is my sixth holiday concert with them.” 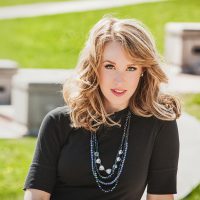 Anderson, a 2011 Carmel High School graduate, will appear in both Dec. 8 performances with the IWS at the Palladium at the Center for Performing Arts in Carmel.

The 3 p.m. performance is “Fun with Santa and Mrs. Claus” and is geared more for children. The 6:30 p.m. concert is called “It’s the Most Wonderful Time!”

‘This 6:30 show is more of our traditional Christmas concert,” Conrad said. “The big finale of that is always Jessamyn doing ‘O Holy Night.’”

Santa is portrayed by former CHS English teacher Ken Knowles, and Mrs. Claus is Conrad’s wife, Ann, a retired choral director at CHS. They have performed as Santa and Mrs. Claus for years.

“They’ll be doing photographs in the lobby following the concert and they will be doing ‘’Twas the Night before Christmas’ and audience sing-along with Santa,” Conrad said.

The afternoon show will be 45 to 50 minutes.

In the children’s concert, Anderson will perform “Let it Go” from “Frozen” and “White Christmas.”

She also sings “White Christmas” and “Let it Snow” along with the finale.

Anderson’s album, “There is a Season,” came out in September. It features six new arrangements from The Great American Songbook.

“I knew only one song by heart before choosing the songs for the album. The rest I chose after listening to many recordings and doing a lot of research,” said Anderson, who will be selling the album in the lobby after the concert.

Anderson returned to Carmel from Nashville, Tenn., in September after her mother, Beth Anderson, died in August so she could have needed time with her family.

“I am so excited to be part of the arts scene in my hometown, a community that has given so much to me through the years,” Anderson said.