You are at:Home»Current in Carmel»Carmel Community»Altrusa Club of Hamilton County celebrates 30 years of giving back

The Altrusa Club of Hamilton County is celebrating 30 years of giving back and making a difference for Hamilton County residents. The club was chartered in 1989 at Woodland Country Club and is a local chapter of Altrusa International.

Altrusa International was founded in Nashville, Tenn., in 1917. During that time, a record number of women were working during World War I, and there was a need for women’s civic organizations. In 1935, Altrusa became international when the first club in Mexico was organized. 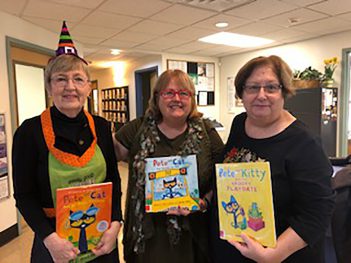 From left, Pam Trumbauer, Pam L’eal and Carol Rader are members of the Altrusa Club of Hamilton County. (Submitted photo)

“The big emphasis is getting people together to find a need within the community and working to end that need,” club member Joanne Kemp said. “In the past, we’ve worked a lot to advance literacy in Hamilton County.”

The club has distributed books and library calendars with children’s reading tips to families in Hamilton County municipalities such as Westfield, Cicero and Sheridan.

The group meets on the second Monday of each month in different locations throughout Hamilton County. Of its 10 members, four have been with the group from the beginning.

ACHC has completed projects including picking up garbage, providing money to local women’s groups and volunteering at CarmelFest.

“Wherever there is a need, then we will fill it,” Kemp said. “It doesn’t have to be about literacy. That’s just our big push right now.”

To celebrate the club’s anniversary, it is hosting a dinner at 7 p.m. Dec. 9 at The Old Spaghetti Factory, 918 Range Line Rd., in Carmel. Guests are encouraged to bring a food item or cash to be donated to HVAF of Indiana, a veterans’ organization.