You are at:Home»Current in Fishers»Fishers Community»Lautman addresses how communities must compete for workers

Mark Lautman has built his reputation as an economic architect.

Lautman is the founding director of the Community Economics Lab, a nonprofit think tank that innovates new approaches to economic development. 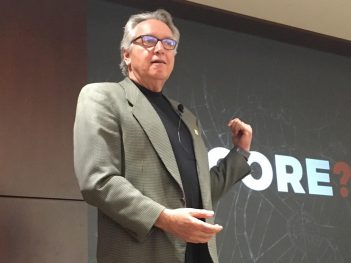 Lautman addressed the OneZone Chamber of Commerce Nov. 13 to share his research from his book, “When the Boomers Bail: How Demographics will Sort Communities into Winners and Losers.”

“When you look at changes, it’s leadership and conditions,” Lautman said. “What is going to happen over time and where are leaders coming from?”

Lautman joked about Carmel mayor Jim Brainard, who was recently elected to his seventh term.

“Jim is 65, so he’s pretty much done,” Lautman said. “Don’t tell him I said that. But as you look around, where are the next class of leaders coming from? Before you discuss economic development, you should define it. I see economic development as how do you grow your economy faster than the population?”

The first component is jobs.

“Are the jobs increasing in productivity? Are (the workers) making more money?” Lautman said. “The next metric is money. Is income going up and are people above the poverty line? The last one is your economy is better. Are people advancing better?”

Lautman said the public has become aware the U.S. has a labor problem, possibly long-term.

“But they haven’t really sat down and processed it,” he said. “Ten years ago, I saw a graphic that showed the U.S. would be creating jobs faster than workers were coming into the market. The whole idea we were going to run out of labor as an economy just didn’t make any sense after hearing my whole life we were an over-populated planet. It’s already happened, and it’s just going to get worse, probably for the next 20 years.

“(The way) to grow talent or grow your company is to steal talent from someone else,” Lautman said.

Lautman said times have changed in luring businesses to communities.

“All you had to do to get companies to move into our communities, for most of my career, it was we’ll give you the land and we’ll give you a bunch of tax breaks, concessions on utilities and train your employees,” Lautman said. “Eventually, you’ll get their cost of operation down below the communities you are competing with, and you had them.”

Lautman said baby boomers were so desperate for a job they would move anywhere, so workforce wasn’t a concern.

“So, no one worried about workforce. It was 1997 before I got the first question about labor,” Lautman said. “If you can’t prove your community has the wherewithal and a really good story on how to attract talent for companies and how to steal from their competitors, you going to have a hard time making that deal.”

Lautman said companies won’t come if they can’t find workers. He said Fishers and Carmel are  in good shape compared to most other communities in ability to attract companies.