“We’ll have a ribbon-cutting that morning and we’ll have special giveaways and activities all week long,” said Christy Walker, CCPL communications manager. 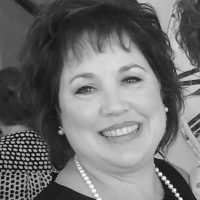 “When she moved to Carmel, she just fell in love with the library,” Walker said. “Working with the library and serving the library became a huge part of her life. On the 100th anniversary of the library, she and her husband, Jim Winner, spearheaded the Centennial Society, whose goal was to raise $100,000 in community support for the library.”

“After she passed away, we realized the new branch was going to be located in the neighborhood where the Winners lived,” Walker said. “Between that and Joyce’s longtime involvement with the library, we felt it was only appropriate to honor her by naming the new location after her.”

Jim is pleased with the honor.

“He is touched, but I think especially so because we’re spreading the library to the part of the community where they live,” Walker said. “We’ve been talking about extending service to the west side of Carmel for a long time, so this is something she would have been especially pleased to see. Sadly, she won’t be able to see the doors open.”

Library patrons will be able to return items to either branch. The 5,000-square-foot building will showcase the conveyor return system so guests can view the process a loaned item goes through when returned.