You are at:Home»Current in Fishers»Fishers Community»Public, police remember K-9 Harlej

A Nov. 20 memorial ceremony for Fishers Police Dept. K-9 Harlej brought out many members of the public and dozens of K-9 officers from nearby law enforcement agencies. Harlej, pronounced Harley, a 5-year-old Belgian Malinois, was shot and killed following a pursuit and manhunt Nov. 13. 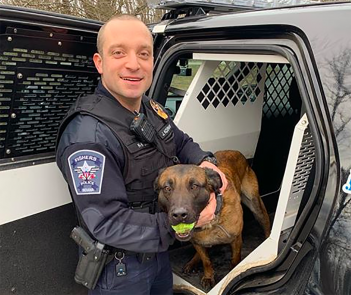 The ceremony was a celebration of life for Harlej, who was 14 months old when he was selected as an FPD K-9. He joined the FPD in April 2015. In his four-plus years of service, Harlej had hundreds of deployments, several bite apprehensions, several civil apprehensions and discovered hundreds of pounds of marijuana, hundreds of thousands of dollars and more.

Noblesville Police Dept. K-9 officer Brandon Brooks spoke about the bond between a handler and the dog at the memorial service. Brooks is in the same K-9 training group as Koopman.

“The bond between the handler and K-9 starts from first time they interact,” he said. “He (the K-9) lives to please you and lives to get praise from you. You become a team, and you need to depend on each other to be successful. There is no better feeling as a handler than to look back in the vehicle and see the ears up and the eyes of your partner staring at you patiently waiting to serve you.”

Koopman’s wife, Kim Koopman, also spoke during the ceremony. She read part of a letter she wrote the day Harlej died.

“I feel lucky my husband gets to go to work every day with an extra pair of eyes, not to mention his partner’s keen sense of smell and his very loud bark. Not every police wife can say that, but while he was very ferocious by night, (Harlej) was also unlike most police dogs by day. You could always find him wagging his tail looking at his favorite guy,” she read. “To see the bond Jarred had with him gave me goosebumps. … Being so grateful for such a protective partner for Jarred also brings with it such great sadness – the potential of loss times two. You wait for both of them to come home together. So, when your husband calls you at 3:30 in the morning and starts the conversation with ‘I am OK, but Harlej is gone,’ a part of you crumbles. The loss feels unbearable, and your family breaks a little. And Jarred comes home alone. Most people probably think ‘all this sadness for a dog?’ And part of me can believe that because most dogs wouldn’t follow you into the darkness of danger.”

Harlej was the first K-9 in FPD history to be killed in the line of duty.