You are at:Home»Current in Westfield»Westfield Community»Del Webb community moves to final approval stage

A new Del Webb age-restricted community proposed for Westfield has cleared one more hurdle and is moving to the Westfield City Council for final approval. 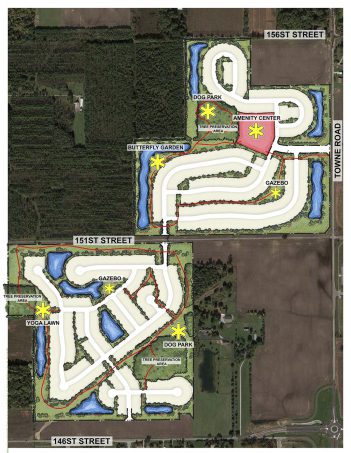 At its Nov. 6 meeting, the Westfield Advisory Plan Commission voted 5-2 in favor of a rezone request for the Pulte Homes development that could bring 490 age-restricted, single-family homes to 151st Street, west of Towne Road. If approved, the zoning would change from agricultural/single-family rural to single-family high density.

After last month’s public hearing on the request, Jon Dobosiewicz, an attorney with Nelson & Frankenberger representing Pulte and Del Webb, presented a new property layout after residents complained of not being able to clearly define sight lines in the original concept plan. The layout and concept plan now shows the areas of the proposed lots, tree preservation areas, a gazebo, retention ponds, a dog park and a large amenity center and an expanded 200-foot-wide buffer and common area along the entire west side of the property, which would incorporate the development’s proposed trail system that travels throughout the north and south portions of the property.

Commissioners Ginny Kelleher and Dave Schmitz voted against the request, citing several concerns that primarily focused on architectural features and a lack of “four-sided architecture.”

Plans for the development are similar to the Britton Falls neighborhood in Fishers, which also is an age-restricted neighborhood.

“Claiborne Farms will have a positive impact on the overall community,” Dobosiewicz said. “Local schools, churches, the libraries, civic groups, Grand Park and the Wood Wind Golf Course will all benefit from higher levels of volunteerism of its residents. There also will be a positive impact on local schools. All tax benefits will be realized. No child under 19 is allowed to live on the property for more than 90 days, so the neighborhood will produce no school-age children, but the households will (still be subject) to paying referendum money.”

The Westfield City Council was set to vote on the rezone request at its Nov. 11 meeting. Read more at youarecurrent.com.