With the 2020 Summer Olympics in Tokyo fast approaching, Carmel Swim Club wants to be ready.

“Every year after the Olympics, it excites people to swim,” Carmel Swim Club head coach/CEO Chris Plumb said. “We want to provide an outreach and have all kinds of people learn how to swim.” 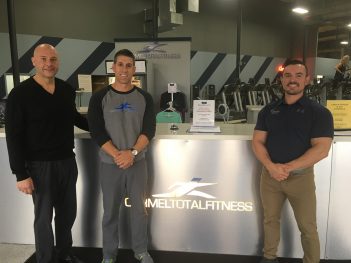 That will get a little easier with a CSC training pool as part of a planned expansion at Carmel Total Fitness, 820 City Center Dr.

Daniel Klausner and Scott Visser co-own the gym, which they acquired in 2006 and renamed. Klausner is the owner of the real estate and developer of the project. Visser is the operating manager.

Klausner said the expansion to the west of the building will add 11,5000 square feet. There will be two businesses operating in the space, Indy Spine and Rehab and Carmel Swim Club.

“It’s working with two other businesses that want to build health and wellness,” Visser said.  “The benefit we can offer of everything in one place is going to be huge.”

Klausner said they will make some improvements to the gym as well.

Along with the training pool, Carmel Swim Club plans to establish its corporate headquarters at the site. The goal is to have the pool ready by November 2020.

“We’re in a bit of a rush because Indy Spine wants to be here as soon as possible, as does Carmel Swim Club,” Klausner said.

Klausner said plans will be presented to Carmel’s zoning board in December.

Plumb, who also coaches the Carmel High School boys and girls swimming teams, said the additional pool will help with the club’s ability to teach younger athletes how to swim.

“It will ease the space at our current pool by moving the younger kids over to this pool,” Plumb said. “We see it as a 10-and-under pool for our club and also providing opportunities for master swimmers during the day.”

“It’s going to be good access,” he said. “We’ve been around this area, and I’ve always kind of eyed the area that this would be a good spot.”

Watters said there are four chiropractic physicians in the office, currently at 40 Executive Dr., Suite E, with plans to add a fifth in January 2020.