You are at:Home»Current in Fishers»Fishers Community»Police K9 killed in line of duty

A Fishers Police Dept. K9 was killed in the line of duty shortly after midnight Nov. 13.

After an FPD officer attempted to stop a Cadillac traveling northbound on Interstate 69, the driver refused to stop and a short pursuit ensued. The pursuit was terminated near 131st Street and Olio Road, where the male driver ran from the car. The female passenger, Rashaana L. Farrow, 19, Indianapolis, was taken into custody. 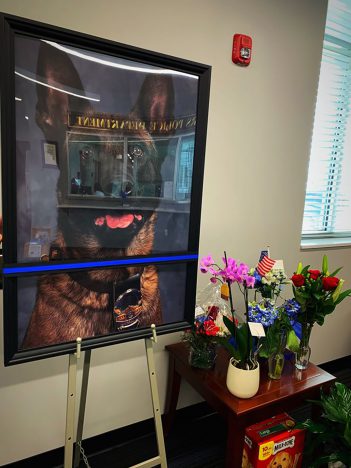 A memorial for K9 Harlej is on display at the Fishers Police Dept., 4 Municipal Dr. (Submitted photo)

Officers then established a perimeter and began a manhunt for the male suspect. During the search, FPD K9 Officer Jarred Koopman observed the suspect and when the suspect refused commands to stop, Koopman deployed his K9, a 5-year-old Belgian Malinois named Harlej. Following the deployment, officers heard a gunshot, and the dog went missing.

Several hours later, the male suspect was taken into custody and identified as Richard D. Garrett, 19, of Indianapolis. He was transported to an area hospital where he received medical treatment for a minor leg injury due to a dog bite. Both Garrett and Farrow were transported to the Hamilton County Jail without incident.

Later, officers found K9 Harlej in a wooded area. During his pursuit of the suspect, Harlej was shot and killed. Harlej has served with FPD since 2015.

Since the community learned of the news of Harlej’s passing, FPD Public Information Officer Tom Weger said the department has received lots of support.
“We have received an outpouring of support – everything from comments on social media, voicemails, emails, monetary donations to the (Fishers Police) foundation, food, flowers. So, we certainly appreciate all the support and we are going to need it in the coming days as we deal with this loss,” he said.

A memorial for Harlej is currently set up in the lobby of the FPD station, 4 Municipal Dr.

To donate, visit fishers.in.us/1101/fishers-police-foundation. Donations also can be made in person at the FPD.