You are at:Home»Current in Carmel»Carmel Community»Tinsel and Tails returns for 13th year 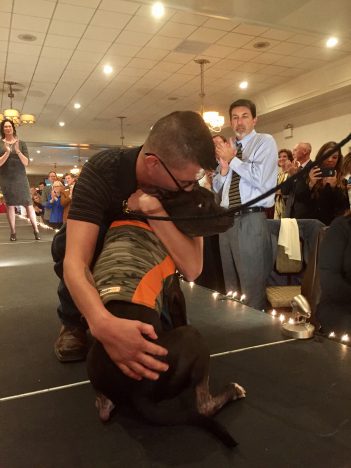 Wesley Bolin, a veteran who spent eight years in the Marine Corps, meets Taz, a rescue dog, at a past Tinsel and Tails event. (File photo)

Guests can enjoy a silent and live auction, dinner and a video montage featuring animal success stories of the year.

“It features about seven to 10 of the year’s most remarkable stories of rescue and redemption, and these are stories of survivor pets. They survived something unthinkable,” Stevens said. “One of them is a survivor of animal cruelty, which really inspired my involvement in pushing to get this new animal ordinance (in Hamilton County) in place. We tell the stories about rescue, not just because an animal was rescued, but because of how some of these animals rescued people. These stories are incredibly inspiring.”

After the video, the featured families and their pets walk on a runway that passes through Ritz Charles.

“Everyone has a chance to see them and meet them,” Stevens said. “It’s really a very moving and poignant moment of the event.”

Stevens encourages anyone in interested in attending to purchase tickets soon because they will sell out. Tickets are available at hamiltonhumane.com/programs/events/tinsel-tails.

Other features of the event include $100 raffle tickets for an opportunity to name a dog kennel or cat condo at the new Humane Society when it opens in Fishers.

The event has its first-ever title sponsor with Canine Cloud Nine and Cosmos Superior Foods.