You are at:Home»Current in Zionsville»Zionsville Community»Zionsville grad Smits comes home to Butler

For Derrik Smits, being in the friendly confines of Hinkle Fieldhouse just feels right.

After playing three seasons at Valparaiso University, the 7-foot-1 Smits is playing basketball for Butler University as a graduate transfer. 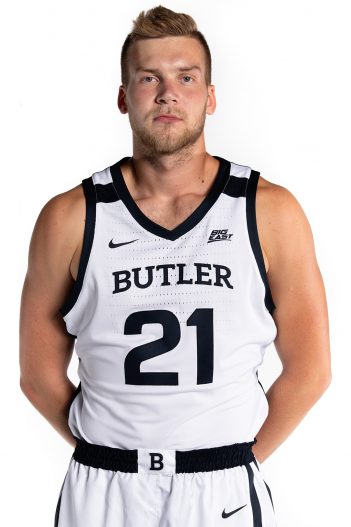 “This is home for me,” the 2015 Zionsville Community High School graduate said. “It’s awesome. I’ve always loved Hinkle. I have a lot of friends and family around here.”

Smits grew up attending Butler games and was recruited by the Bulldogs at ZCHS. But he said that interest cooled off after ex-Butler basketball coach Brad Stevens, another ZCHS graduate, took the Boston Celtics job in 2013.

Smits played three seasons for Valparaiso, and he redshirted in 2015-16 because of an injury.

“It wasn’t the same feeling as here,” said Smits, whose Bulldogs open the season Nov. 6 against visiting IUPUI. “It was part challenge and part wanting to get out of my comfort zone (at Valpo). It’s a huge opportunity here to play minutes and play with a great team and do big things. It felt like (Valpo coaches) would be putting me in a box at times.”

“It’d be nice to be known for you and not your dad,” Smits said. “I’d like to say we’re similar, but he was obviously a very good player. I’m trying to get there. We have similar skills. He’s a big guy who can shoot and pass. I’ve worked my butt off so I can shoot and pass.”

Smits said he wasn’t supposed to shoot 3-pointers at Valpo but has worked on his range.

“But I’ll shoot a 3 every couple of games or so to keep the defense honest,” he said.

“Everyone knows Dan. Having another person I could talk to about it helped,” Smits said.  “He got it worse than me. He’d hear terrible things before games and he’d laugh about it.”

Rik Smits moved to Arizona after his son graduated from ZCHS. However, Rik has a place now in the Indianapolis area so he can see his son play all the home games his final collegiate season.

Smits said he is eager to play in the more physical Big East against bigger players.