Mike Super fell in love with magic at age 6, and his future was never up for discussion.

“Everyone knew I was going to end up doing magic and being a magician,” he said.

“They can expect the same vibe of show, comedy, magic, music, theater and different emotions with all new tricks,” Super said. “We’re going to be doing a time travel trick this time, and I’m going to jump in the future and meet a future one of them and bring back proof, which is always pretty flabbergasting for the audience.” 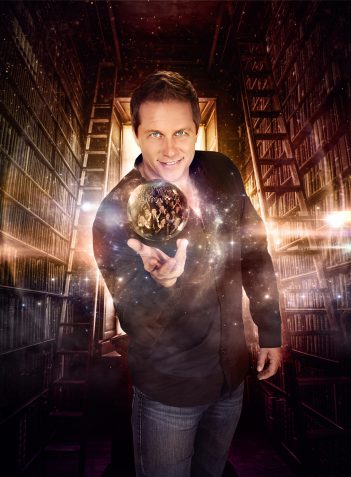 Perfect for near Halloween, Super said he will predict a murder in a live game of “Clue” with the audience.

“It’s all, of course, family friendly,” he said. “We are going to make an audience member disappear. Last time we made someone levitate, this time we are going to make one disappear for 3 1/2 minutes, and then we’ll bring them back because it’s the law.”

Super, who claims he is on a perpetual tour, recently returned from the military leg of the tour, visiting 52 Air Force bases with the show.

“Hopefully, I get to come back with my ‘Third Time’s a Charm’ show,” he said. “We’re working on my development for my fourth show. I just like to have all new experiences for the same people, so they can bring their friends, too.”

Super won “Phenomenon” on NBC in 2007, winning the grand prize of $250,000. He said the television exposure always helps.

“It makes more people want to see you, which is amazing,” he said.

Super, who lives in Pittsburgh with his wife Brooke and their two daughters, said he tests his magic on daughters, Farrah, 10, and Fiona, 6.

“If the kids pay attention, I know it’s a good trick,” he said.