With Halloween nearing, Gregory Hancock Dance Theatre usually takes a step onto the dark side. 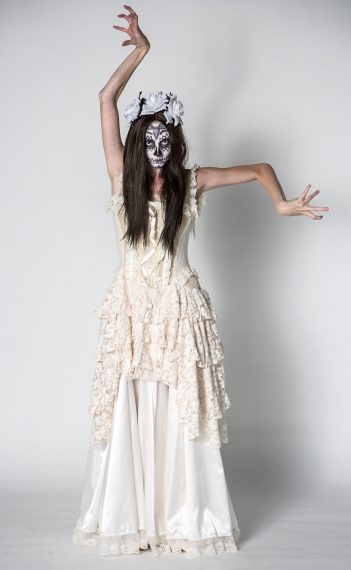 “Since we’re at the edge of Halloween, it’s fun for the dancers to be a little darker and not like a fairytale character,” Hancock said. “Audiences sometimes enjoy our darker pieces, and we thought this is a good time of the year for that.”

Gregory Hancock Dance Theatre is presenting “The Seven Deadly Sins” and other dark tales at 7 p.m. Oct. 25-26 at The Tarkington at the Center for the Performing Arts in Carmel.

The performances begin with the debut of “La Llorona,” followed by repertoire pieces “The Remaining” and “Salome.” The second half of the show will be “The Seven Deadly Sins.”

“It’s always exciting to do a new piece and have choreography made on your body,” said Abbie Lessaris, who plays the title role. “It’s a dark story about a woman who finds out her husband is having an affair and she decides the best way to punish him for that is to drown their children. We do have a few children in the show who are playing our children. We’ve pretended we have children, but to hold the hands of two kids and put them in the river is a little dark and creepy. We often get to be pretty or dynamic or interesting, but we don’t often get to be scary. It’s fun to be scary.

“It’s kind of like going to see a horror movie in the theaters. You go for the experience, not to see the beautiful actresses or the love story.”

Lessaris said “The Remaining” is about a tribe of women who hunt down a man, mate with him, kill him and then eat him.

“It’s very tribal and animalistic, which is different from the other pieces,” Lessaris said.

“Salome” is the biblical story of John the Baptist losing his head.

In “The Seven Deadly Sins,” Lessaris represents the sin of gluttony.

Lessaris was in the class as a student in the original production in 2008 and again in 2011.

“This is my first time performing the piece as a company member,” Lessaris said.

Hancock said “Seven Deadly Sins” has been an audience and dancers’ favorite in the past.

“The piece ends hopeful, since virtue comes in and destroys all the sins at the end,”