That means stopping the flow of drugs. 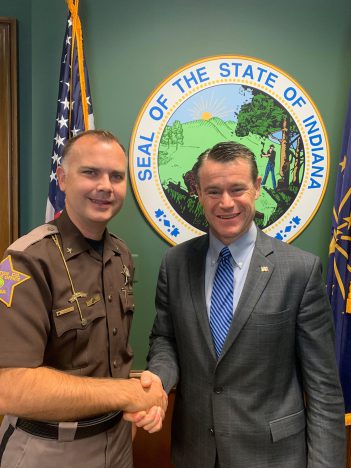 “With the recent epidemic with heroin and fentanyl and crime and death that we see in our community, it’s something I see is us to continue to address at every front,” Quakebush said. “If we’ve got a significant supply coming into our community, we want to address it as best we can. They are mixing the fentanyl with the heroin to get a better high and it can cause cardiac arrest and death. The majority of drugs that come into Hamilton County are coming across the Mexican border. We estimate 80 percent of it is.

“Our drug task force, for instance, when they are working cases, they are working directly with border patrol. We are arresting people from the cartels in Indianapolis and they are sending new people back to replace them almost immediately.”

Quakenbush recently joined five other Indiana sheriffs and nearly 200 sheriffs from across the nation in Washington, D.C., to support secure borders and safe communities.

During the Sept. 25-26 event, Quakenbush met with many state and federal legislators and  federal law enforcement agencies, attended an administrative briefing and panel discussions with the Dept. of Justice and the Dept. of Homeland security and attended a White House briefing followed by meeting with President Donald Trump.

“I’m encouraged by the federal law enforcement agencies and their willingness to work with us on any investigations or help us with any of our needs,” Quakenbush said.

Quakenbush said the problem of human trafficking was another main topic.

“Some of the statistics they provided in the briefing were just incredible, something like at least 30 percent of girls are raped traveling to the United States,” he said. “The border patrol agents and even some making traffic stops in Oklahoma are making stops where cartels are driving across the border where no one in the car knows anyone else. You have young men or women in the vehicles (and they) have no idea who they are with and where they are going. Their families had just sent them across. It’s a huge concern.”