You are at:Home»Current in Carmel»Carmel Community»Carmel looks to expand redevelopment site near CFD HQ, Monon

More than two years after receiving lower than expected bids from developers for land near Carmel Fire Dept. headquarters, the city is considering expanding the project area and trying again.

This time, in addition to the 3.3 acre parking lot north of the CFD headquarters at 2 Civic Square, it would also include a strip of city-owned land to the west that fronts the Monon Trail.

The Carmel City Council’s land use committee discussed the transfer of less than 1 acre to the Carmel Redevelopment Commission at an Oct. 2 meeting. The committee sent the matter back to the city council with a unanimous favorable recommendation. 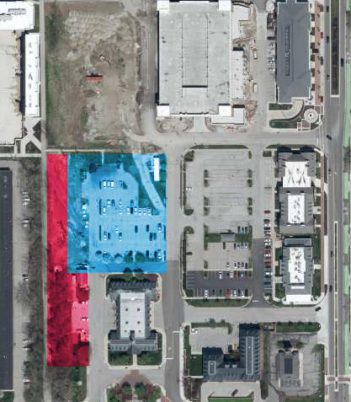 “The redevelopment commission would like to see what kind of tax-generating, neighborhood-creating project we can put on this site,” CRC Director Henry Mestetsky said. “We have lots of examples of for-sale products and residential products fronting the Monon. I think everyone generally agrees that only enhances a neighborhood and enhances the Monon itself.”

CFD Chief David Haboush said he supports the land transfer. The site houses a shed used by the street department but little else.

“The only concern that I personally have about neighborhoods being that close (to the station) is that at 7 a.m. we have shift change,” he said. “Between 7 and 7:30 every morning, all of those trucks are checked out.”

The parking lot north of the fire station previously appraised for $3.7 million, but the top bidder in 2017 offered only $300,000. The CRC director at the time said the bids possibly came in low because of infrastructure improvements needed to facilitate the project, such as drainage upgrades and relocating a street.

“No developer came in with a project that the redevelopment commission deemed acceptable,” Mestetsky said at the committee meeting. “We want to continue to see if we can find a development with a developer that works.”

Since then, the city has opened the Veteran’s Way garage in nearby City Center, which is expected to provide parking for on-duty firefighters once a project is under way. Haboush said he’s started parking there and has told firefighters that their usual lot isn’t expected to be available much longer.

“We get it, a parking lot doesn’t produce an income,” Haboush said. “We know that the city is growing.”

Councilor Kevin “Woody” Rider, who attended the meeting but is not on the committee, said he has concerns about the Veteran’s Way garage running out of available space. He said he doesn’t want city vehicles currently stored in the space designated for the project to be kept in the garage.

“We keep promising that same garage to different things. Everything we want to build in that area we keep telling them they can park at the City Center garage,” he said. “It was built to accommodate what is going to be built at City Center. A parking lot for our unused inventory is not part of that.”

Mestetsky said the extra vehicles could possibly be stored at the Proscenium, a mixed-use development under construction on the northwest corner of Range Line Road and Carmel Drive. It is set to open in 2020.