You are at:Home»Current in Carmel»Carmel Community»Carmel High School celebrating 150th anniversary this year – to everyone’s surprise

To the surprise of everyone, Carmel High School is celebrating its 150th anniversary this year.

It’s surprising because CHS celebrated its centennial 32 years ago. However, the Carmel Clay Historical Society recently completed a year-long research project on the history of Carmel schools and learned CHS was actually founded 18 years earlier than previously thought. 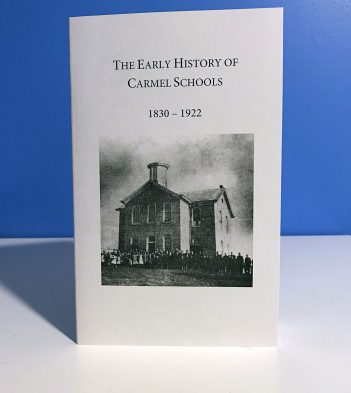 In 1868, a Quaker congregation in Carmel called the Richland Monthly Meeting built a two-story brick schoolhouse on the southeast corner of Smokey Row Road and Range Line Road. It has long been believed the congregation operated the school as a private academy, Wright said. However, CCHS research discovered a lease document in the sub-basement of the old Hamilton County courthouse that reveals what really happened.

Instead of operating the school itself, the congregation leased the property to the township, which furnished the building and opened a public graded school on Jan. 4, 1869. A school announcement published in a Noblesville newspaper in 1869 confirmed the arrangement between the church and township.

“There was no indication that the history of Carmel High School was inaccurate until the lease document was discovered, so it was quite a surprise,” Wright said.  “The Quakers typically operated their schools as private academies. It was unusual that the Richland Monthly Meeting immediately leased the building they constructed to the township. Later generations assumed that the history of the Carmel school followed the typical pattern.”

There was more convincing evidence in several newspaper announcements for Carmel High School in 1882 and 1883, Wright said. These were published four to five years before the school was believed to have been founded.

“The school’s frequent name changes might have played a role (in the confusion),” Wright said. “In its earliest years, the school was called Carmel Academy and then Richland High School, but by at least 1882, the school billed itself as Carmel High School.”

CHS was one of only a handful of public high schools in the state when it was founded.

Athlete of the Week: Carmel High School safety finds his talents on the football field, not in the pool
Share. Twitter Facebook Pinterest LinkedIn Tumblr Email
Previous ArticleZionsville State of the Schools focuses on safety, prevention
Next Article Hamilton County Republican aims to challenge governor in 2020 election
Follow us on Social Media