You are at:Home»Current in Carmel»Carmel Community»Carmel task force urges city to pause installation of 5G infrastructure

Carmel’s Cable and Telecommunications Commission is urging city leaders to stop allowing the installation of small cell towers throughout town until their impact on health can be studied.

The commission sent a memorandum to the Carmel City Council Sept. 13 outlining the findings of a task force assembled to study the issue. It recommends the city “immediately pause the installation of ‘small cell’ antennas until more scientific data is available” and continue using fiber optic cable to deliver broadband to homes and businesses. 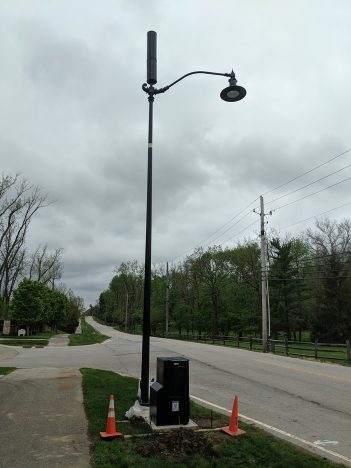 Telecommunications companies have been installing infrastructure throughout the nation to improve wireless networks from 4G to 5G speed, which is much faster. It often uses antennas or small cell phone towers placed closer together and lower than traditional cell phone towers, sometimes on existing structures such as utility poles.

But as the technology has spread, many people have raised concerns about it potentially leading to health problems. The Carmel commission’s memo points to a National Toxicology Program study released in 2018 that found “clear evidence” of tumors in the hearts of male rats exposed to high levels of radio frequency radiation used in 2G and 3G phones, technology still used for phone calls and texting. The results do not apply to 4G or 5G technologies, which were not included in the study.

The memo states that the results of the study have quickly shifted prior presumptions about the safety of wireless technology.

Winston Long, chairman of the Carmel Cable and Telecommunications Commission, said he is “seriously concerned” about the possible negative impact of small cell towers.

“I didn’t want to be the person that is the creator of tension, but on the other hand, if I’m convinced it’s doing harm, for the benefit of our citizens and the benefit of our state and our nation it’s time somebody stepped forward and started making this information available,” he said.

In 2017 Carmel took action to exempt the entire city from a state law that allows telecommunications companies to install certain infrastructure in public right-of-way without approval from local municipalities – but city leaders mostly cited aesthetic reasons at the time.

Small cell towers may still be installed in Carmel, but only with approval from the Board of Public Works. As of mid-June, small cell towers had been installed near Ditch Road and Ridgegate Lane and 96th Street near Cloister Drive East and West to improve existing networks, but 5G service was not available. Current has requested updated information from the city.

Sara Jo Grethlein, medical director for cancer services for the IU Health Joe and Shelly Schwarz Cancer Center at IU Health North Hospital, said she does not object to the installation of the towers based on current information.

“I think that it is reasonable for us to be concerned enough when new technology arises that we need to study it. At present, there is no convincing evidence that the radiofrequency radiation that small cell towers expose us to are a risk,” Grethlein said. “For now, I trust the data and the expertise of the American Cancer Society, the Food and Drug Administration and the National Cancer Institute and don’t object to the installation of these towers.”

She encourages people with concerns to support organizations that are researching the topic.

Long said he plans to present the commission’s findings to the Carmel City Council during a presentation at its Oct. 7 meeting, which will begin at 6 p.m. at City Hall.

“It’s something we can’t look away from, not if we really care about our people,” he said.