You are at:Home»Current in Carmel»Carmel Community»Turquoise tables aim to build community in Hamilton County

A new movement is coming to Hamilton County that aims to foster community among residents and visitors.

Kristin Schell created the Turquoise Table Movement in Austin, Texas. Tables are placed strategically throughout a city as a meeting spot where people can enjoy conversation.

Hamilton County Tourism is responsible for making the concept local. 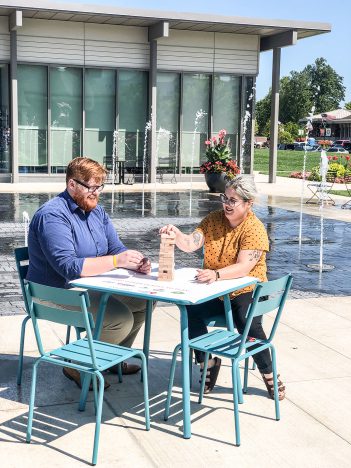 Ross Hilleary, a planner with the City of Fishers, and Kelli Jenkins of Hamilton County Tourism, play a game at a turquoise table. (Submitted photo)

“We launched an initiative this year called Creative Economies,” Sarah Buckner, HCT destination development manager, stated in an email. “After speaking with artists, arts organizations and community event planners, I developed a team of arts leaders in the county. We took a trip to Minneapolis in June to the Americans for the Arts National Conference to learn about arts, community, placemaking. While exploring, we saw fun game tables. We liked that they brought people together to play a game and have a chat.”

A member of the team, Aili McGill, informed Buckner about the Turquoise Table Movement. The two ideas were melded. The tables will offer games like Jenga, chess and checkers and will be placed in five participating communities.

“Carmel, Fishers, Noblesville and Westfield each received three outdoor tables and four chairs,” Buckner said. “The board-game tops are a weather-resistant material that adheres to the tabletop. Cicero’s Pocket Park was not large enough for three sets, so they have one.”

The tables were placed within each community in August, and it’s up to each to decide when to put them away for the winter. When the spring arrives, the tables will be placed back in parks in the community.

“The Turquoise Table Movement encourages community and inclusivity,” Buckner said. “These tables will hopefully bring people together in a fun way. They are outside playing a game. They may be meeting a new family or neighbor. The hope is to build community, conversation and play.”