You are at:Home»Current in Noblesville»Noblesville Cover Stories»Parking overhaul: City looking to change rules for drivers in downtown district

For three decades, the City of Noblesville has followed the same parking ordinance. Now, significant changes are being proposed to the downtown district that could change metering, time limits and enforcement.

At its Sept. 10 meeting, the Noblesville Common Council heard a proposal from Noblesville Police Chief Kevin Jowitt to amend the existing parking ordinance. He outlined a range of changes for a one-year pilot that has the support of Mayor John Ditslear.

“The city will use 2020 as a one-year pilot to study the impact of these changes in order to set a permanent strategy after the Levinson parking garage opens,” Ditslear said.

“We think we’re going to enhance the parking situation considerably,” Jowitt said. “When the parking ordinance was originally enacted in 1989. You have to think about how different downtown Noblesville was. The judicial center was not even there. Noblesville had about one-third of the people that it has now. The county had about one-third of the people it has now. There were about half the number of superior courts, and the nature and occupancy rate of the downtown businesses was considerably different than it is today.

“So, fast forward to today. We’ve got a very different complexion of the users of downtown parking with really no additional spaces to speak of, so that caused us to review and have a great deal of discussion with business owners and other downtown parking users to try to craft a situation that was going to work for the largest number of people.” 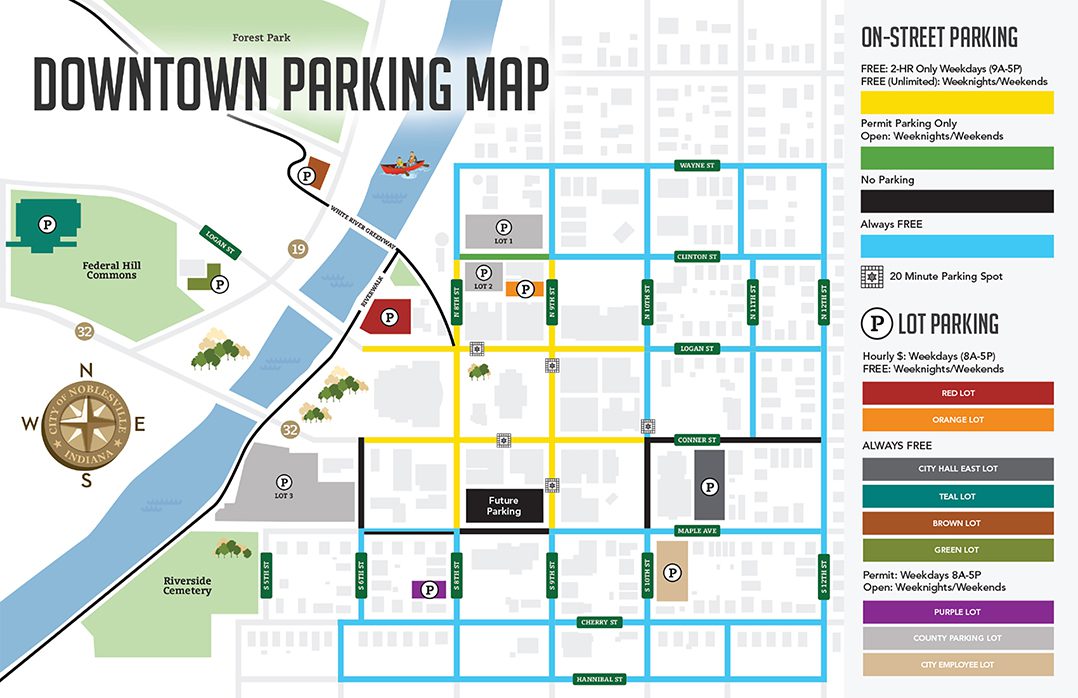 Perhaps the most notable proposed change involves areas where two-hour parking is enforced.

Approximately 19 blocks of what is now two-hour street parking would be changed to free, unrestricted parking. Two-hour parking areas would only be in place in a “hashtag” or “tic-tac-toe” area of the downtown square and one block beyond. Enforcement hours would be from 9 a.m. to 5 p.m. Monday through Friday.

“This will allow for a great deal of more parking for employees of downtown businesses that are away from the square,” Jowitt said. “Other users who are going to tend to stay a little bit longer than two hours are still going to have readily available parking that’s still close, just not on the square proper or radials from the square.”

The rule for two-hour parking downtown – which limits drivers to park in the zones for just two hours each day, even if they move spots or leave downtown and return – has not and will not change. But in recent months, the city has begun using a vehicle with license plate-reading technology to monitor cars and write tickets. Prior to that, the practice of chalking tires was used for years.

“Chalking tires was ruled as an impermissible search by a federal district court of appeals just east of us,” Jowitt said. “Although this didn’t directly apply to Indiana, that’s probably the way things are going to go, so we had to change from chalk to LPR technology.”

Jowitt said the amendment, if approved, also would allow the city to establish short-duration parking spaces.

“What we’re proposing is five spaces with 20 minutes duration each,” he said. “The purpose of these spaces is for someone who wants to run in somewhere and grab a cup of coffee or into the hardware store to buy a bolt. (These spaces) will not fall under the two-hour time restriction window. They are their own zones.”

Nine variations make up the surface lot parking in the downtown district.

“Then we’ve got the paid parking lots, which (on the map) are the red lots, orange lot and the City Hall east lot (dark gray),” Jowitt said. “The red lot being the lot right next to Courtney’s Kitchen (and) the City Hall lot is just on the east side of the building. The orange lot is the small lot a half block north of Alexander’s.”

The lots are open to the public at all times and are metered between 8 a.m. and 5 p.m. on weekdays. On weekends and on weeknights between 5 p.m. and 8 a.m., parking is free.

Permit-only lots, which are purple, light gray and beige on the new parking map, including the existing Hamilton County parking lots and the city employees parking lot to the south of City Hall. The lots are open to the public between 5 p.m. and 8 a.m. on weeknights and on weekends. 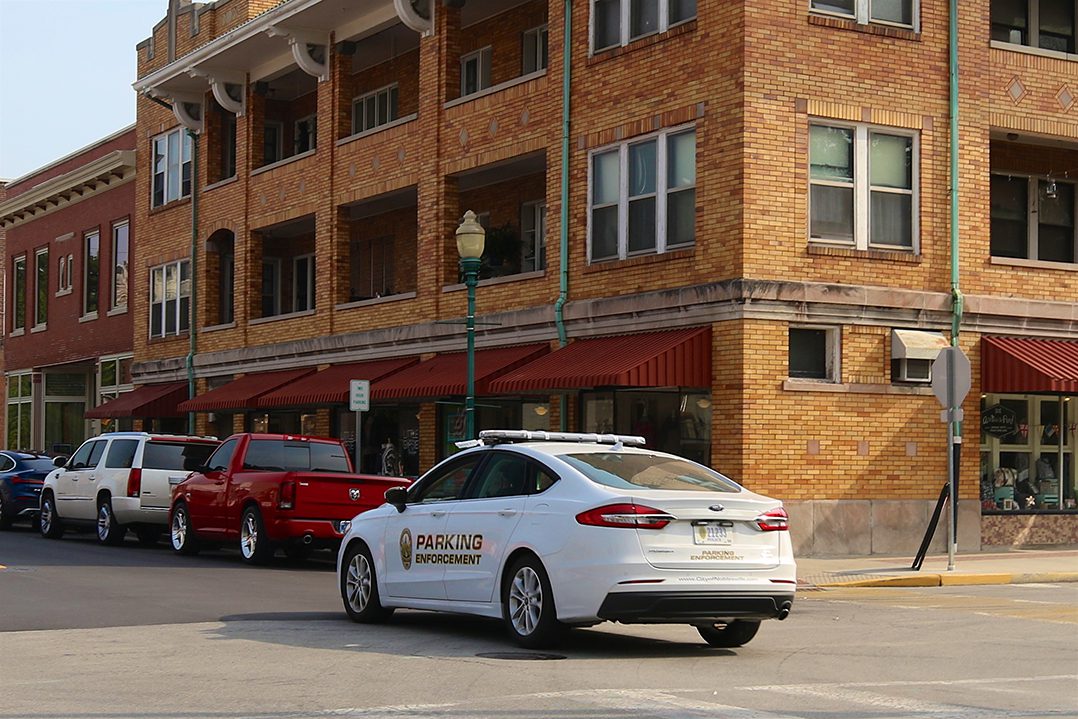 Jowitt said although the two-hour parking rule has been in place for awhile, the LPR technology is new and that the police department plans to work with drivers in the area to help them understand the parking laws.

“For a first-time offender, which the LPR technology will recognize, instead of getting a ticket, they’re going to get a flier on their windshield that says they’re in violation,” Jowitt said.

Jowitt presented a draft to the council at the Sept. 10 meeting.

“It basically points out to the individual that they’re not parked correctly, here’s the game plan, here are the rules, here’s an explanation of kiosks and (lets them know) where they can park, and then on the back there’s a parking map,” Jowitt said. “We’re hoping this is an informational piece that will be very useful, especially for people who are new to Noblesville, who are just coming maybe for the first time to shop or eat. So, rather than dealing with a ticket, they’ll just be confronted with information telling them what they can do next time to be in compliance with the parking ordinance.

“Noblesville has never made money from its parking and fine system. It’s generated enough to pay for the enforcement effort. It’s not a revenue-producer.”

City officials will conduct a public meeting Oct. 1 at City Hall, 16 S. 10th St., to discuss the proposed changes and answer questions. The Noblesville Common Council is set to vote on the amendment at its Oct .15 meeting. If approved, changes will go into effect Jan. 1, 2020.

During the Sept. 10 council meeting, Bob DuBois, president and CEO of the Noblesville Chamber of Commerce, spoke in favor of the proposed changes to the city’s parking ordinance. DuBois has served on the city’s parking task force for several years, representing local businesses.

“This isn’t a government solution here,” DuBois said. “This really is a solution that was generated from all of that, listening to the public for the past several years, surveying the public and the things they told us, concerns about the two-hour limit, challenges for employee parking, technology that matched the decade we are in, short-term parking spaces, clarity on where parking exists, ticketing that comes with education. So, sometimes some of the best solutions come a little organically, a little messy, but today’s pilot plan does all of that.”

DuBois said he looks forward to the data that will come from the changes and what it will mean for future planning.

“We’re going to get a lot more data from the new technology from both the kiosk meters and the license plate reader (so) that we can make really smart decisions going forward,” DuBois said. “A lot of it (so far) has been counting cars, hiring a walker to do some on-the-street studies that were week-specific. We’re now going to have a year of data to be able to look at. Our commercial mix may change three years from now, and we’ll have to re-evaluate it, but we’re also going to have a whole bunch of new parking coming online (in The Levinson).

“For folks that want free parking, less than 500 feet from every downtown business, there’s free parking (proposed in this ordinance). That’s not so bad.”