“I’m so excited go back to Westfield because that was the first stage where I sang,” said Brooks, who performed in WHS’s “American Pie,” a rock history show. “That’s what got me hooked, performing on a stage like that. I’m so excited to do what I’ve been doing the last four years at my own high school.” 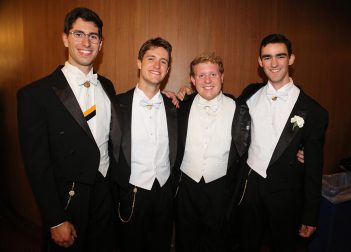 Brooks is one of our four WHS alumni returning with the men’s vocal group for a performance at 7:30 p.m. Oct. 4 in the high school auditorium. The concert benefits the Westfield Education Foundation.

Westfield High School choir teacher Alison Wessel said she was approached by the parents of the Brooks brothers and Dodson about bringing the Purdue Varsity Glee Club to the school.

“This performance is a great opportunity for WHS choir students to see what it possible for them to do after high school,” Wessel said. “They see that they can stay involved in music even if they don’t major in it. Some of the WHS students will sing a song with the Glee Club that evening. It will be an amazing experience for those young men to hear and perform with the Purdue choir.”

Instead of choir, Alec played trombone in the marching band and concert band all four years. He did some extracurricular singing activities but never took choir classes.

“I knew music was a good passion of mine,” Alec said. “I did band since sixth grade. My junior year I realized I kind of enjoyed singing as well. I started to get into that more. By the time I got to Purdue, I realized I wanted to get into that more and try out for the Glee Club. It’s been a great experience these last four years. I really learned a lot more about singing, and it’s become a lifelong thing for me.”

Alec said the club rehearses and performs throughout the school year.

“We start the year with a Glee Club camp before the first week of school to help all our new members learn all the new songs and kind of get back in the swing of things,” he said.

Alec said he was excited when he learned Cooper was interested in attending Purdue and being a member of Glee Club.

“I saw how high caliber Glee Club was and definitely thought about that when I thought about Purdue,” Cooper said. “You start out college with 70 new friends who you are likely to have some classes with in the future.”

“I was in between for going to baseball or going for choir,” Stegner said. “I’ve seen this group a couple times before and it was so much fun seeing them perform. This is what swayed me to Purdue and being a part of Glee Club.”

Stegner, who sings bass for the group, said he talked with Cooper a lot about being in Glee Club during high school.

Stegner looks forward to performing in front of his former choir members at WHS.

Westfield resident Brian Koning, who was in the Purdue Glee Club from 1981 to 1986, is helping promote the event. His son, Kyler, is in WHS’s Signature Sound choir.

“Having four Westfield grads in there now I think is awesome,” Koning said. “It’s probably one of the biggest representations of any one school in the Glee Club. It’s important for parents to bring their students to a cultural event like this. It’s a different style of music. They do a broad range of music, from classical to even some current twists on things.”