For two years, a small park in downtown Noblesville has been the focus of the city’s parks department staff.

A redesign of the park has been under way to reinvigorate its use. Last week, the city and parks department broke ground to mark the start of the reconstruction, set for a mid-November completion.

Features include a new, larger gazebo and gazebo plaza; streetlamp lighting on the perimeter and along pathways in the park; installation of Edison lighting; large swaths of landscaping; new benches and tables; a metal archway into the park; a water fountain along one of the paths; an extension of electrical accessibility; and more shade trees, among other amenities. 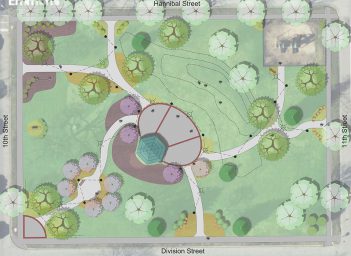 “We’ll be doing new sight lighting throughout with streetlights like the rest of downtown, because this is kind of the gateway (from 10th Street) to downtown,” Parks Director Brandon Bennett said. “We’ll be doing Edison lighting throughout as well. There will be a lot of landscaping beds. There’s going to be a plaza out in front of the gazebo to serve as a gathering space in addition to connectivity (via) pathways to each side of the park.

“The playground is staying because it’s not that old, but we will be installing new fencing around it, and it will be more of an ornate, black fence. Everything is going to have a similar theme as far as trying to look a little bit more elevated.”

The project hit a road bump several months ago when contractors’ estimates came back to the city much higher than expected.

“We actually re-bid the project, which we had to do because estimates came in higher than planned,” Bennett said.

Adjustments were made before the project was re-bid. Some features were taken out of the plans, including colored concrete and a shade structure over park benches. Other items, like the purchase of the gazebo, lighting and artwork, were removed from the request sent to contractors and placed on a list of “owner-provided” items.

“The contract for the project is $322,000,” Bennett said. “But we are going to then be providing some of those owner-provided items in addition to that, and that was to try and help us save money. It just means that I could go and procure some items cheaper than I could if I went through the contractor, but they still have in their price some of the installation of those items. There’s probably another $100,000 in owner-provided items.”

Bennett the total cost will be just above $400,000 because he is expecting donations and sponsorships.

Of that total, $290,000 was received from a community development block grant. Another $75,000 came from the Downtown District Committee fund, and park impact fees of up to $100,000 will be tapped, if needed.

Bennett said he hopes some of the features that had to be removed from original plans will eventually work their way back into the long-term plan.

“There are going to be some things we will add in the future because there are a couple of things we had to cut out to keep cost down,” he said. “Those would have to be funded a different way, or we’d have to have a fundraising campaign or donation. If it’s art, we could potentially get some grants for it.”

One of the most noticeable features will be an archway entrance at the corner of 10th and Division streets. Last week, the parks department put out a request for quotation with a goal to contract a local metal artist for the project. Bennett said he expects the feature to cost approximately $6,000.

“From an aesthetic standpoint, we want it to be more usable,” Bennett said. “I want it to be more of a community park where people will come out and use the gazebo. I see smaller happenings in there, small weddings or other events. It should definitely be more efficient for those types of things. I am hoping it reactivates the park.”

Mid-November has been set as the completion date for overall improvements at the park. Last year’s inaugural Lights Over Seminary, a display of the city’s antique holiday lights, will return for December’s First Friday festivities, in partnership with Noblesville Main Street, the city, Nickel Plate Arts and the Noblesville Preservation Alliance, Dec. 6. Bennett said the plan is to have all park improvements completed to give those organizations a couple of weeks to plan and set up the display.