A younger generation was introduced to the multiple talents of Paul Williams through the 2011 documentary aptly named “Paul Williams Still Alive.”

Anyone alive in the 1970s doesn’t need introduced to Williams, a 5-foot-2 singer/songwriter/actor who was a regular on “The Tonight Show” and who appeared in “Smokey and the Bandit” and wrote many iconic songs. But he then seemingly disappeared from the public view for many years. He is the first to admit the ‘80s were a lost decade due to cocaine and alcohol addiction. 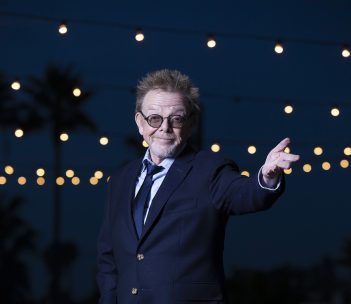 Paul Williams will be inducted into the Songbook Hall of Fame Sept. 21 at the Palladium. (Submitted photo)

Great American Songbook Foundation founder Michael Feinstein certainly recognizes the talents of Williams, who will be inducted into the Songbook Hall of Fame, along with Tony Bennett, Doris Day and Duke Ellington, Sept. 21 at the Palladium in the Center for the Performing Arts in Carmel. Day died at 97 in May and Ellington died at 75 in 1974. Dionne Warwick will provide entertainment at the sold-out Songbook Celebration gala, which supports the center’s artistic and educational programming.

“That’s the music that brought me into music,” Williams said of the Songbook era. “When I was in high school in the ‘50s, everyone was listening to rock ‘n’ roll, I was listening to ‘Only the Lonely’ and (Frank) Sinatra. My favorite song has always been ‘Someone to Watch Over Me.’  It’s wonderful full circle for me to share the company of these amazing songs and songwriters.”

Williams said he considers Feinstein a good friend and sang at his wedding to Terrence.

“It’s remarkable at this point of my life. I turn 79 on Sept. 19. I feel like a tired 34. It’s a remarkable thing to celebrate,” he said. “I get to shake hands with the man (Feinstein) that has kept those songs alive.”

Williams is thrilled to be inducted with such a special group.

“The great thing about what I do for a living is we never have to give up our fan card,” he said. “When I see Tony Bennett, I try to keep that, ‘Oh, My God, there’s Tony Bennett’ look off my face and look as casual as possible. Williams said he was thrilled to add Bennett to the list of famous singers who have recorded his songs, such as Sinatra, Ella Fitzgerald and Elvis Presley.

A lyricist for most of his career, Williams co-wrote The Carpenters songs “We’ve Only Just Begun” and “Rainy Days and Mondays” with Roger Nichols.

Williams wrote most of “The Muppet Movie” songs with Kenneth Ascher, including “Rainbow Connection.

“These are great composers that I worked with and I learned so much from,” Williams said.

Williams won an Oscar for writing “Evergreen,” which Barbra Streisand sang in the 1976 movie “A Star is Born.”

Williams said people frequently come up to him and say they were married to “We’ve Only Just Begun” and “Evergreen.”

“Sometimes that is followed up by we’re not together anymore,” he said. “But it’s phenomenal to think you’ve been part of that magical moment in someone’s life.”

Williams is not singing as much as he used to. He did act in the second season of the Amazon Prime series “Goliath.” For the past 11 years, he has been president of the American Society of Composers, Authors and Publishers.

“I’m not singing as much. Frankly, there are some challenges around my hearing that make it a little difficult to find a note once in a while,” he said. “I haven’t quit singing, but I find I’m really comfortable letting someone else sing the songs.”

Williams initially pursued an acting career but got few parts. He unsuccessfully auditioned for “The Monkees” TV show, but there was a bright side.

“The failure of the acting career led me to songwriting,” he said.

Williams has been sober for 29 years and is a certified drug rehabilitation counselor through UCLA.

“The two things I’m intensely passionate about, recovery, and the other is protecting musicians’ rights and making sure they are compensated for the brilliant work they do,” he said.

With all he has been through, Williams said it made collaborating with French electronic duo Daft Punk for two songs on the Grammy-winning Album of the Year even more special.