Joel Kirk wants to bring a taste of the Broadway process to central Indiana. 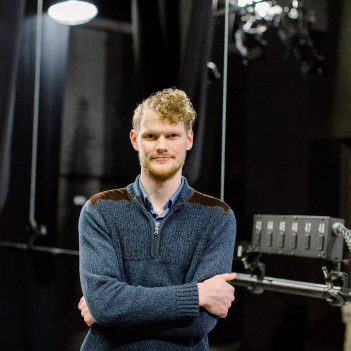 “I was at Hubbard & Cravens several months ago and staring at the Palladium,” said the 2012 Carmel High School graduate, who then began thinking about the arts scene in Carmel and Indianapolis.

“A weird idea came to me that we should have pre-Broadway shows, or Broadway shows in the making, come here to incubate and develop,” Kirk said. “This is one of the most beautiful places to live, and beer is like three bucks, so it’s my ideal Broadway theater camp. The idea is to have Broadway begin here instead of end here (with a touring show).”

“Let’s be the first people to see pre-Broadway shows and readings and concerts in these exclusive incubator labs,” said Kirk, who will serve as artistic director. “The rooms that create Broadway musicals are locked doors. We want to create an educational opportunity for local talent and audiences. We have a robust board of directors and donor base. It’s all Indiana-based. We’ve signed our first show and we’ll be able to announce that the first of October.”

The musical is set for Feb. 14-15 in a central Indiana site to be determined in what Kirk described as an enhanced first reading. He said approximately eight cast members are from Broadway and the other 10 are from the Midwest.

“The selection process is built purely on relationships, so my relationships with my peer Broadway producers in New York, I’ll have conversations with them what they are needing on it,” Kirk said.

Kirk, who acted and was in Ambassadors show choir at CHS, has apartments in New York and Indianapolis.

He graduated in three years from Ball State University and then moved to New York for an internship at New Dramatists.

“Every year, they induct seven playwrights for seven years and give them resources,” Kirk said.

After his internship, Kirk began directing plays for colleges, such as Juilliard and Fordham. He also has directed a play for Ball State.

Kirk recently launched his own firm, where he can produce and direct commercial theater shows.