You are at:Home»Current in Noblesville»Noblesville Cover Stories»Valuable volunteer: Noblesville man honored for home-repair work, giving back

Lamar Ziegler is busier now than before he retired.

The later years of his career in engineering pale in comparison to the work he does now at age 71 repairing homes 6 1/2 days each week.

“On Sunday mornings, I go to church,” said Ziegler, a Noblesville resident.

Ziegler volunteers full time for a litany of area organizations, focusing entirely on home repair for low-income residents or those with disabilities in Hamilton County.

Growing up in northern Huntington County, Ziegler said he learned his home repair skills from his family and area farm community.

“We had extensive extended family, and I had a couple cousins who were always helping, whether it was neighbors, friends or family,” he said. “Like if a neighbor farmer would get hurt, everyone would come together to plant or harvest his crop or bale his hay or tend to his animals, whatever was needed. That made an impression on me. Growing up on the farm, I had lots of life skills – carpentry, plumbing, electrical. My father was an electrician, brother-in-law a plumber.

“Over the years, I’ve expanded and developed those as I got into various home repair projects. I’ve watched a lot of YouTube videos.”

Eventually, Ziegler attended college, started his career and got married. But nearly 20 years ago, a group of men from Emmanuel United Methodist Church started small home-repair projects for members.

“The Bible talks about helping others,” Ziegler said. “It started by doing things for church members, but then it kind of branched out. We put a roof on the parsonage 35 years ago. We put a roof on the church secretary’s house, and then we just started doing more. I once got a call from a lady whose arthritis wouldn’t let her turn on the water valve on the garden hose for winter, so I just went up there and turned the valve off. It was very simple, but sometimes the jobs were that or were as extensive as a roof.”

After 49 years of working in Indiana, Ohio and Kentucky as a civil engineering, Ziegler was laid off from his job in 2007 during the housing slump.

“I had to find something to do with my time,” he said. “I loved doing home repair, so that’s when I really got involved with volunteering more or less full time.”

Today, Ziegler works with a team of fellow volunteers through Shepherd’s Center of Hamilton County.

“The neat thing about Shepherd’s Center is they are a senior advocate group,” Ziegler said. “They do all kinds of activities with seniors. They have trips, bingo, lunches, but then they have this little corner called home repair, and that’s what I’m involved in, the Hamilton County Home Repair Partnership, which is Habitat for Humanity, HAND, Shepherd’s Center, Serve Noblesville, Christmas in Action, Good Samaritan Network, Noblesville Housing Authority. We all work together.”

Ziegler is project manager, assessing homes for clients selected by other organizations. Working with a small budget through Shepherd’s Center, Ziegler said his team relies heavily on donations of building materials and supplies to do the repairs for those with immediate medical needs, like building a wheelchair ramp, or for those facing imminent eviction. Ziegler said in many cases, evictions are the result of residents who are  physically limited and cannot keep up their property.  The team completes projects out of necessity, he said, and never as a cosmetic improvement.

“Some of our clients receive $700 a month in Social Security, and that’s it,” Ziegler said. “You can’t live on that. Yes, you can go get food stamps or use Hamilton County Transit, but when it comes to home repair, the client likely doesn’t have money left over after they’ve paid utilities and other bills, so that’s where me and my team come in. That’s good news. The bad news is that we’re always short of volunteers, team leaders and money. We can always use all three of those.

“Anybody interested in volunteering has to pass the mirror test. I’ll hold a mirror up to your face, and if I see your breath, you’re qualified because we train you.” 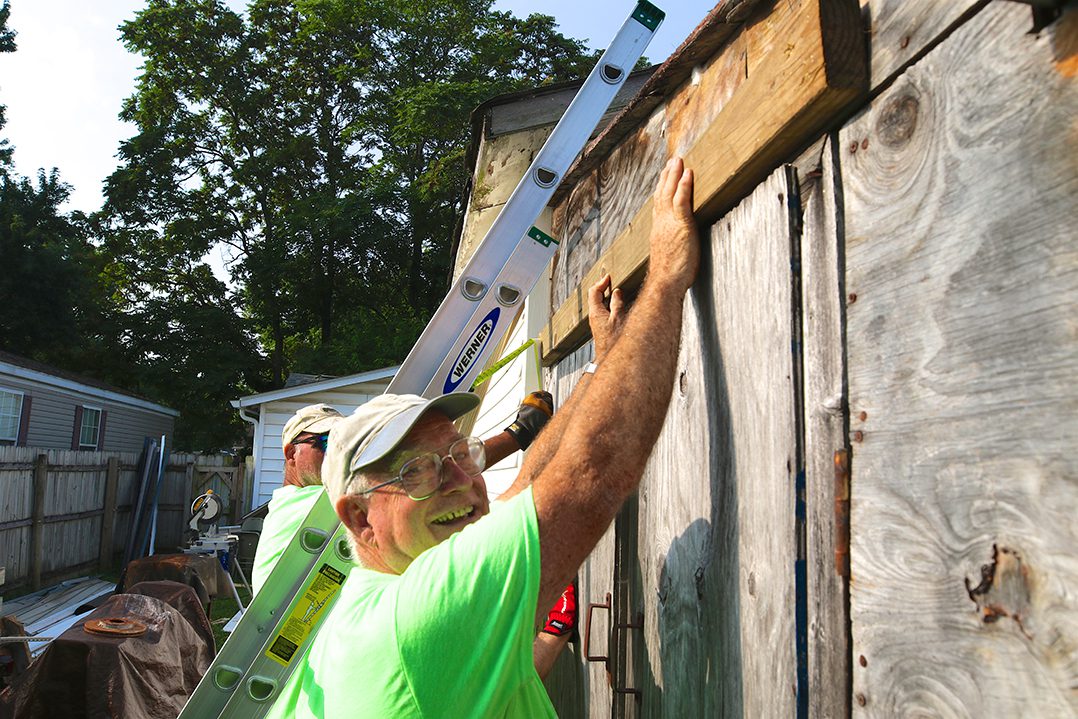 Lamar Ziegler works on a repair project at a home on Hannibal Street. (Photos by Sadie Hunter)

SENIOR VOLUNTEER OF THE YEAR

Lamar Ziegler recently was named the 2019 Senior Volunteer of the Year by the Central Indiana Council on Aging.

“CICOA’s primary function is to allow seniors to age in their homes,” Ziegler said. “There are several reasons for doing that. Most important is that the client feels at home. We have one client who has Alzheimer’s, but she knows in her house where everything is. Her doctor has advised that if she is removed from that environment with her mental condition, she will decline further. We did a floor repair, fascia repair, trimmed some brush and basically got the home to where she could stay in the house. So, clients like that need to stay in their homes as they are physically able to. It’s far cheaper to spend a little bit of money to fix up a house to keep a person in their house than it is to put them in assisted living or a nursing home.

“I admire CICOA because that’s a win-win. You keep the person in their home, and you keep them out of more expensive housing.”

Another example is a 44-year-old who has suffered three strokes and can’t work. Ziegler and his team worked in the client’s home to rehang drapery and fix flooring and woodwork in her home.

“I hate to say that many of the clients we serve are much younger than I am, and they’ll never see age 71,” Ziegler said. “So, we want to make their lives as comfortable and convenient as possible.”

As of Aug. 15, Ziegler’s team, through Shepherd’s Center, has worked on more than 41 homes this year, and he has worked on several others through other organizations. Homes often require more than one repair. Recently, a home required an extensive porch rebuild, new trim, electrical work, a back porch deck and ramp.

“I love doing this. The smile on people’s faces when they can now do something they could not do before, like take a shower or walk out of a new doorway, it’s priceless,” Ziegler said. “That makes it all worth it, so I intend to do this as long as the Lord keeps me physically able. I’m not jumping off of ladders anymore, and I do have some limitations and lots of scars.” 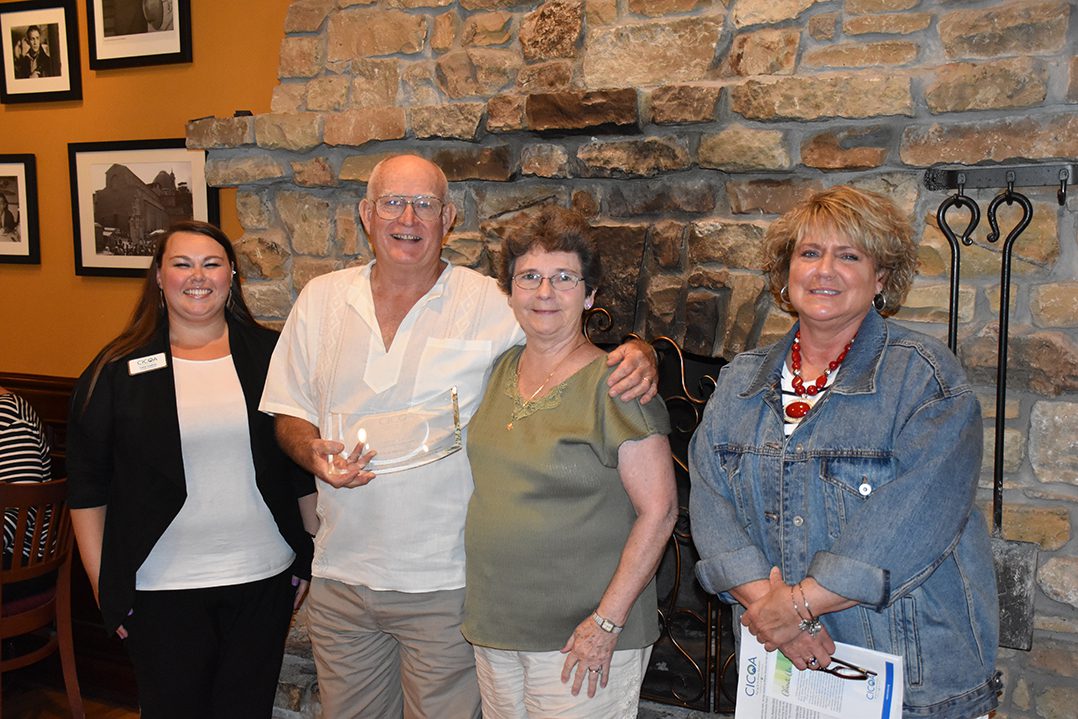 Lamar Ziegler has been married to Kay, a retired teacher, for 48 years. They’ve lived in Noblesville for 38 years

During his engineering career, he worked in Muncie as a city engineer after college before working in eastern Kentucky for a year, eventually moving to Carmel, working as a consultant for highway and traffic engineering projects.

Ziegler has worked with Shepherd’s Center of Hamilton County for 1 1/2 years and has volunteered with Christmas in Action, where he serves as vice president, for 12 years. He has worked with Serve Noblesville, where he is a board member, for 10 years and Habitat for Humanity for seven years.

In addition to volunteering, Ziegler is a part-time missionary to Brazil, spending 11 weeks there this year for church and home construction. This month also marks 30 years since Ziegler began leading a Methodist construction mission in southeast Kentucky.

Ziegler also is a member of the Washington Township Lions Club and a volunteer at Conner Prairie, where he drives the tractor for Symphony on the Prairie and Headless Horseman.