You are at:Home»Current in Noblesville»Noblesville Community»City, diversity coalition respond to anti-Semitic graffiti in downtown 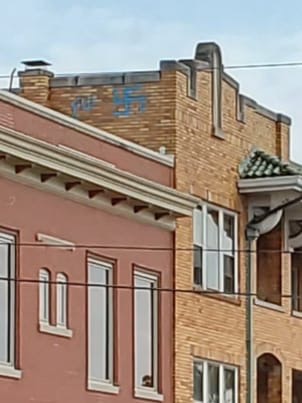 Anti-Semitic graffiti has prompted City of Noblesville officials and the Noblesville Diversity Coalition to release statements rejecting and condemning the vandalism and what they are calling an act of hatred and ignorance.

Over the Labor Day weekend, police said they were made aware of two incidents of anti-Semitic graffiti in the downtown area on a public trail and on the historic Richwine Building at the northeast corner of Maple Avenue and Ninth Street. The blue, spray painted swastika and other graffiti has since been covered.

“Several areas in downtown Noblesville were vandalized this weekend with anti-Semitic graffiti. The city strongly condemns the actions of the cowards responsible for defacing these public areas,” a statement from city officials read. “There is no place for this kind of hatred and ignorance. The city is working with the Noblesville Police Dept. to investigate, apprehend and hold accountable those responsible.”

The NPD opened a criminal mischief investigation the morning of Sept. 2 after receiving several complaints over the holiday weekend. At that time, police said they had no suspects.

“The Noblesville Diversity Coalition was angered by the recent anti-Semitic graffiti that defaced a building and other areas over the weekend. It’s important that we stand united as a community against such acts of hate, teach our youth the importance of respect for all cultures and religions – and celebrate the diversity that makes Noblesville a vibrant community.”

As of press time, city officials said city staff is working to permanently remove the graffiti from areas where public property was affected.

Anyone with information regarding this case is encouraged to contact the NPD at ‪317-776-6340‬ or visit www.p3tips.com/713.