You are at:Home»Current in Zionsville»Zionsville Community»Mayoral candidate Styron and incumbent Haak talk on traffic, Sycamore Flats 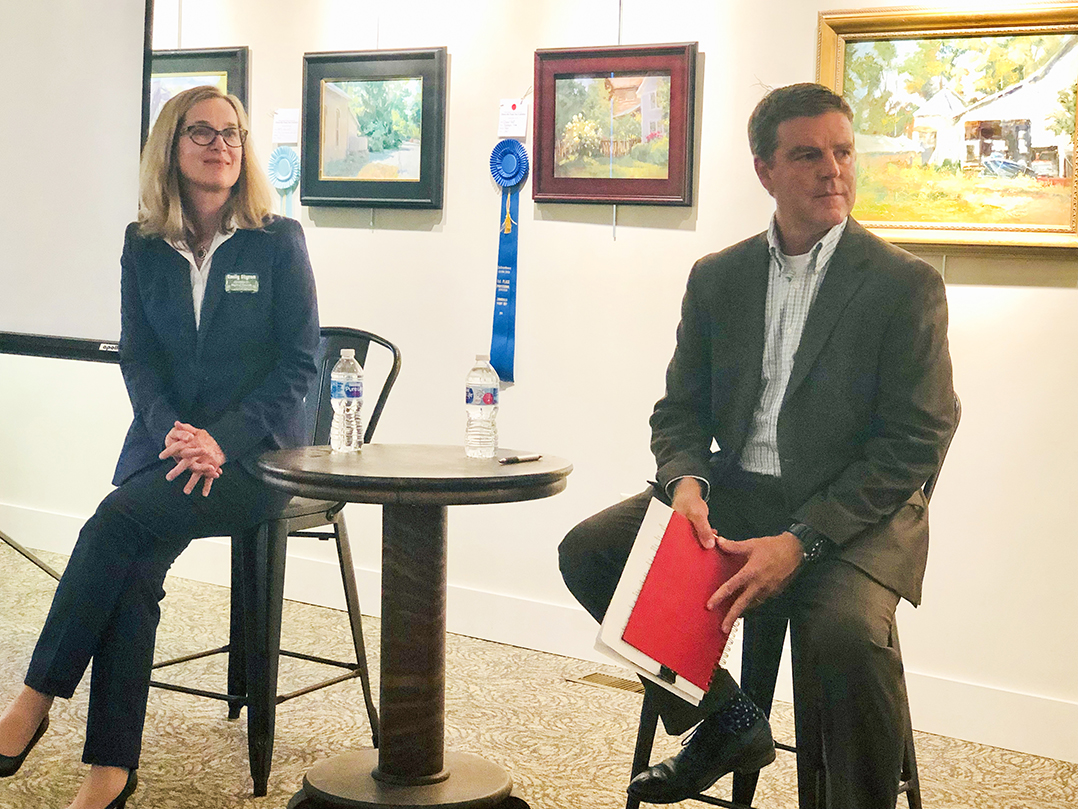 Styron and Haak answered questions from moderator and Village resident Scott Lusk, who asked about traffic, the Sycamore Flats proposal, the importance of the town’s comprehensive plan and other topics.

“Traffic is an easy conversation to have. Just south of here (SullivanMunce), Zionsville Road is being reconstructed and is going from its original narrow two lanes to three lanes with proper width and a bike pathway on the west side,” Haak said. “Next year, we are starting a north-south connector that goes from Cooper Road up to 865 and connects Oak Street with the high school sports campus and is book-ended by two roundabouts. After that, we are replacing the stoplight at Oak and Kissel with another roundabout.”

Haak said the town is working with Boone County on a corridor study that will connect 146th Street from the Boone-Hamilton County line to the Whitestown town limits.

Styron said although she doesn’t have the advantage of listing all the town’s projects because she’s not in office, she still has ideas.
“I don’t have the same benefit of being the mayor today and running through what our future plans look like, but I can tell you as a resident who’s been paying attention to traffic congestion for years and wondering when we will make a move for implementing the plans in the 2012 economic development plan, I just wonder why it’s taking quite so long to move some of these projects forward,” she said.

Both candidates also spoke on their stance on the Sycamore Flats proposal, a mixed-use development for the Village that raised concerns from residents and business owners.

“Sycamore Flats was the wrong-sized facility in the wrong place,” Styron said. “It’s not a bad project.”

Styron said the project could have benefits for Zionsville placed in a better location.

“My stance on Sycamore Flat is that (planned unit development) is the right classification. I would have been supportive of that, but the TIF agreement that was proposed, I would have voted no,” he said. “It was not beneficial to Zionsville. It too heavily favored the developer, and I would not have approved the development plan that was going to be proposed where the majority of remonstrance was and the developer being inflexible with dealing with members of the public on the plan. I would not have been able to support that.”

Another question addressed the town’s comprehensive plan and giving the town’s boards and commissions the ability to approve projects outside of the plan.

“The comprehensive plan is a plan, but it’s fluid and it’s meant to be changed. It matures as Zionsville matures,” Haak said. “Everything (that) goes into it is meant to be changed and morphed, and how we deal with various bodies (boards and commissions) and proposed developments is key.”

Styron had a different opinion.

“I think if you have to make changes to the comprehensive plan because things change, then you change the comprehensive plan. You go through the process, open and transparent,” she said. “If we don’t follow those plans, if we consistently deviate from it or provide some sort of exception, it loses its power. It becomes effectively null and void because you have had more exceptions than you’ve followed that rule.”