You are at:Home»Current in Carmel»Carmel Community»Carmel golfer plays memorable round with Tiger

Aaron Busse waited a long time, but he finally got to play a round of golf with his favorite golfer, Tiger Woods.

“I’ve been a proud supporter of the Evans Scholars Foundation for eight years,” the Carmel resident said. “They get a spot every year, and they were nice enough to let me have their spot because they knew I was a fan of Tiger.” 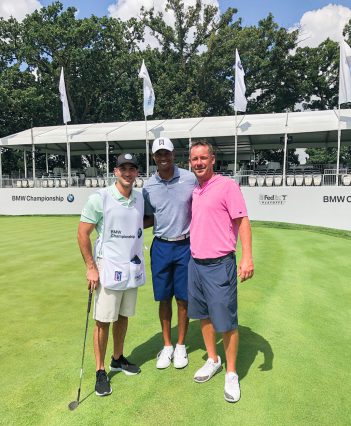 Busse started to wonder if it would ever happen with Woods’ injuries through the years. Even after it seemed set, Woods withdrew before the second round of the Northern Trust golf tournament Aug. 9 because of a mild oblique strain.

“It made me worried he was not going to make the BMW,” Busse said.

But, fortunately, Woods did make it to the BMW Championship’s Pro-Am Aug. 14 at Medinah (Ill.) Country Club.

“From the moment I knew he was coming it was pandemonium with anxiousness,” Busse said. “I was trying to have a bucket-list item (playing with Woods). I had 60 people, friends, families and customers, cheering me on.”

Before they started, Woods told the amateurs “all the pressure is on you guys, it’s not on me, which was entirely true.”

“The pros get intimidated playing with him,” Busse said.

After the third or fourth hole, Woods noticed Busse had a pretty big gallery.

“He said, ‘This is kind of a first, you’ve got as many people cheering you on as I do,’” Busse said. “I thought that was cool he had taken notice of my group.”

Woods gave Busse some advice on the course.

“It was a memory of a lifetime,” Busse said.

It was made even more special because he had a solid round.

Busse has used his sand wedge instead of a putter for eight years at the suggestion of club pro. Never a great putter, Busse began to have some success with the wedge and stuck with it.

Busse said other pros, Phil Mickelson, Dustin Johnson and Brooks Koepka, he had golfed with always comment on Busse using his wedge to putt. Woods did not.

However, Busse said one of his friends, John Madonis, caddying for him, said Woods would watch intently when Busse putted and didn’t do that with the other amateurs. Madonis, a Carmel resident, caddied for nine holes, and Fishers resident Saher Hadi caddied the other nine holes.

Busse said reporters from The Golf Channel and ESPN asked about how he started using a wedge.  The PGA Tour tweeted about it.

“I didn’t realize the stuff with the wedge would take off, because I had played with some pretty big names before, but I guess that’s the Tiger factor,” Busse said.

In the final round at Medinah, Woods used his wedge to get out of a trap and then kept it to tap in a one-footer.

Busse said he doesn’t know if that was a nod to him or a coincidence.

“I’m going to take it as an ode to myself,” said Busse, who works for Steel Dynamics and also shares ownership of auto dealerships in Fort Wayne and racehorses.