Former Noblesville Mayor Mary Sue Rowland did not propose the idea for Shakespeare in the Park at Federal Hills Commons. But she brought on board the person who did. 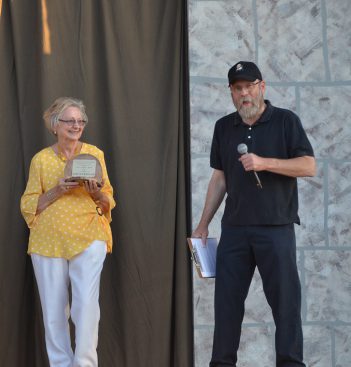 During her first term in 1992, Rowland appointed Jane Campbell as the city’s first “Minister of Culture,” a position designed to promote and grow the arts in Noblesville. A long-time arts advocate and leader of the Noblesville Shakespeare Club, Campbell proposed the popular Shakespeare in the Park series in 1993 and remained actively involved in it until her death in 2006.

As a tribute, the Noblesville Cultural Arts Commission created the Jane Campbell Award, given to an individual who enhances and supports local arts. The first award was presented Aug. 2 prior to the Shakespeare in the Park performance of “Macbeth.” The recipient was Rowland, who not only had the foresight to appoint Campbell, but also proposed the creation of the cultural board during the first of her two terms as mayor.

Honored to be the first recipient, Rowland is even more delighted that the award recognizes Campbell’s legacy for tirelessly strengthening local arts.

“I was very pleased. It was a very thoughtful award,” Rowland said. “It was very special (to receive), especially at the Shakespeare event. I knew it would be successful and hoped it would last a long time, and it has.”

Rowland, a lifelong Noblesville resident who served as mayor from 1988 to 1996, credits Campbell and a host of local volunteers and community leaders for planting the seeds that have grown the arts in Noblesville. Shakespeare in the Park, which recently competed its 27th season, is among the most visible examples.

“Jane Campbell and her husband, Frank, shared their leadership and determination to make all of the arts a part of our community,” Rowland said. “Without Jane and her band of community leaders, the success of art for communities might have taken a lot longer to become so important to all who live here today.

“Those were great days, and I am glad to have been a part of the vision.”