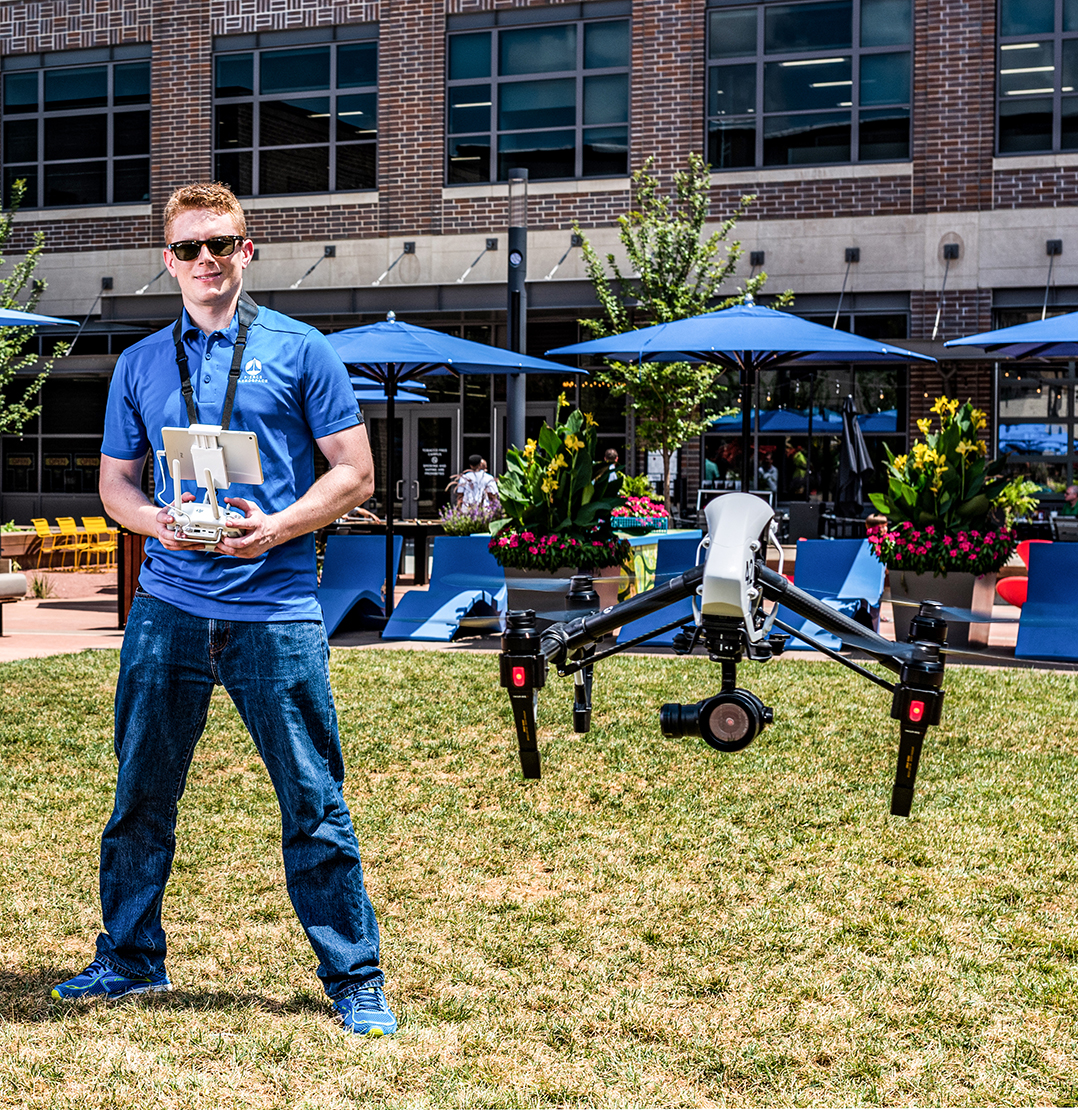 The lure of aviation has always been there for Aaron Pierce.

“My grandfather, Jerry Anderson, was a pilot who flew supersonic bombers out of Grissom Air Force Base in Indiana,” Pierce said.

In high school, Pierce volunteered with an air rescue group that restored Huey helicopters for educational and veteran events. In fact, Pierce was working on a private pilot license when he started his company, Pierce Aerospace, in January 2016.

“I didn’t have time or funds for that anymore,” Pierce said of the pilot license. “I’ve always been around aviation but didn’t necessarily think I would get so ingrained into the fundamental back end of what the next wave of aviation would be, which is the unmanned aircraft.” 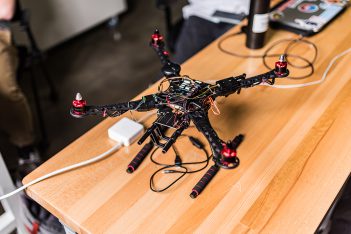 Pierce Aerospace is working on technology to identify drones in airspace. (Photo by Ben Stout)

Pierce Aerospace is a remote identification company, which means it identifies drones in airspace.

“Right now with all the drones flying there is no way to tell who is who and who is actually operating that aircraft,” said Pierce, a Carmel resident and 2007 Carmel High School graduate. “The remote ID takes away the anonymity of that and allows for figuring out who is who, which helps structure the airspace for organization and management, to be able to deliver packages or fly beyond visible line of sight.”

Pierce Aerospace supplies information to the defense department and commercial sectors. Pierce identifies drones through a broadcast or network identification.

“If you are going to hire someone, you want to make sure they have the right federal credentials to fly in that airspace,” Pierce said. “It’s like a digital license plate in the sky.”

Pierce said if a drone is larger than 250 grams it will have to have a remote ID on it.

“Even little Timmy down the street will have to have remote ID if he’s got one bigger than that,” Pierce said.

Anderson, a Carmel resident who was once in charge of safety at Grissom and a lieutenant colonel who served during the Vietnam War, helps advise Pierce on safety aspects.

Originally, Pierce’s company was working on a digital logbook for IUPUI for unmanned aircraft. This led him to submit a white paper “on a whim” to the United Nations, and soon he was invited to give a presentation in Montreal in front of civil aviation agencies from around the world in the fall of 2017.

“As a single-person company, they invited me to speak literally to the world about ideas on how to handle this,” Pierce said.

Pierce found it eye-opening that the demand for remote ID services was that high.

“At that point, we pivoted to focus purely on the remote ID piece,” Pierce said. “In doing so, we turned a lot of our competitors into potential customers and we got a lot of interest from the Dept. of Defense. That evolved into us working closer with the Air Force.”

The Air Force awarded a contract to Pierce last year.

“We’re continuing to build both the government and commercial sector interest in what we are doing,” he said.

Pierce said there are many drones large enough to deliver parcels that are five pounds or less.

Pierce Aerospace previously structured an alliance with Altitude Angel, an unmanned traffic management provider. The goal of the alliance is to bring automated drone flight a step closer.

“They’ll provide air traffic management for unmanned aircraft,” Pierce said. “They are one of the largest ones that does that in Europe. They are headquartered in the United Kingdom but they serve all of Europe. They are also looking into coming into the U.S. as well.” 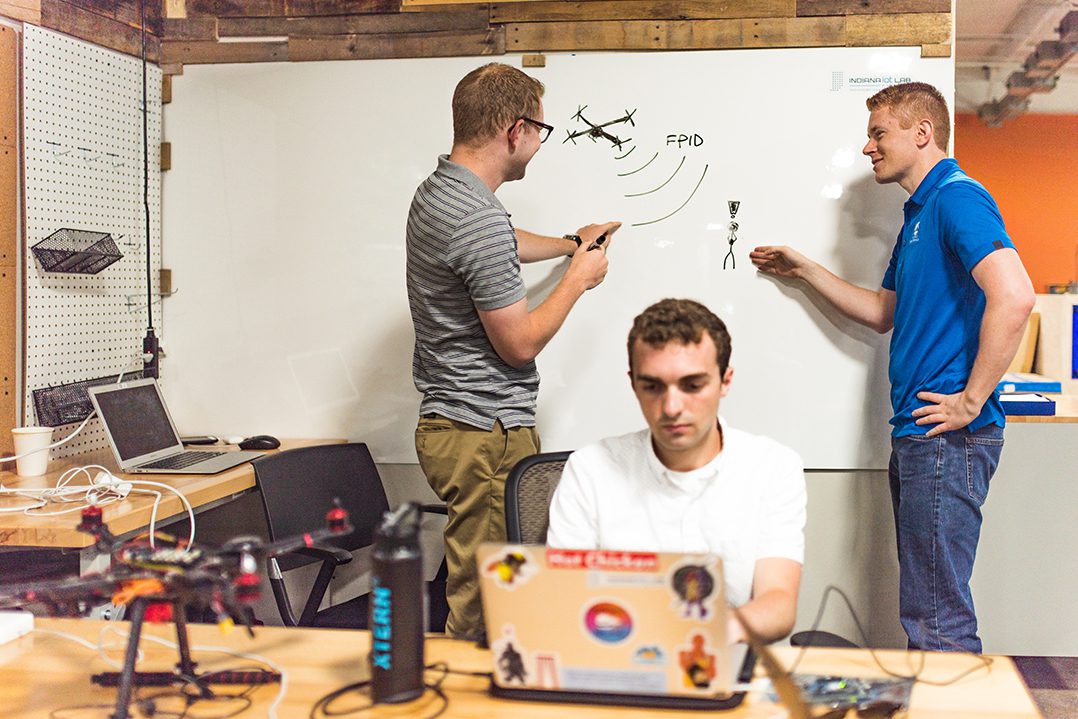 Personal: Met fiancee, Becca Street, at Carmel High School. They’ve been a couple for 13 years. She is finishing her degree at Logan University in St. Louis to become a chiropractor.  Pierce graduated with a degree in English and creative writing from IUPUI. He was working on a master’s degree at IUPUI in geographic information science remote sensing in graduate school but left school early to start his company. While working on his master’s, he taught an Earth science class at University of Indianapolis.

Pierce said a goal is to make Indiana a place of relevance.

“From my company’s perspective, we have an enormous amount of talent from the state we can recruit from,” Pierce said. “A lot of that talent goes to Silicon Valley right now. We want to retain it here in the state as we continue to grow.”