You are at:Home»Current in Fishers»Fishers Cover Stories»It’s a grand life: Fishers couple produce podcast for grandparents

Emily Morgan wanted to provide a guidebook for grandparents in the modern era.

“There is very little out there to support grandparents and grandparents need a place to have conversations and express what is happening in their lives,” Morgan said.

So, Morgan and her husband, Mike, decided to produce “The Grand Life,” available on podcast outlets such as Apple and Spotify.

Morgan, 59, said many people her age are just figuring out how to use podcasts.

“The first episode was the evolution of grandparenting and how things have changed,” Morgan said. “In another episode, we talked about the loss of a grandchild, whether they died suddenly or through illness.”

One guest talked about being a single grandparent to 15 since his wife died.

The Morgans operate in a makeshift studio in their Fishers home. However, there isn’t room for several people for a panel, so they held a panel at Hamilton East Public Library’s Ignite Studio in Fishers. That episode, the 10th of the season, will debut Aug. 15.

The 35- to 40-minute podcast is bi-monthly and consists of four segments, Morgan said, including an interview with a couple of guests about the theme of the episode, an essay called “The Stretch it Takes” that encourages grandparents to be flexible in their relationships with their children and grandchildren; an interview with a grandparent called “Passing Along Your Passion” that involves explaining a passion that a grandparent has and passes on to a grandchild; and a book, music or piece of art recommended for sharing with your grandchildren.

“We interview ordinary people who are extraordinary in their own way and have a passion they like to pass on to their grandchildren,” Morgan said. “It’s called ‘Passing Along Your Passion,’ so it could be anything from scuba diving, woodworking, sewing.”

Morgan said the panel at Ignite discussed the difficult parts of grandparenting that people don’t usually discus. The panelists were anonymous to listeners to avoid offending anyone.

“Things like the amount of time that is expected of them to give to their grandchildren when they also have jobs and also have parents who are aging and all the expectations millennials tend to place on grandparents,” Morgan said. “It’s very different than it used to be.”

Morgan said she can talk honestly because her relationship with her children and grandchildren is open.

“Some grandparents end up taking care of their grandchildren all the time,” Morgan said. “That’s really hard on them. I told my daughter I would have a job if I wasn’t watching her kids, so I need to be paid. So, she paid me a reasonable wage to watch her children. Even though they were my grandchildren, that was a boundary I needed to set because I needed to work, even though I was glad to watch them because they are very special to me.”

At the time, her daughter worked 12-hour shifts as a nurse.

“The expectation used to be grandchildren come to the grandparents. That is the home base,” Morgan said. “The expectation is you travel to see the grandkids since there are just two of you.”

One episode, called “Facebook Fail,” focused on the use of social media as a grandparent with some guidelines.

“It was triggered by young moms telling (Emily) that some grandparents are really bad at deciding what to post as grandparents,” Mike said.

Mike, who serves as the producer and recording engineer, is a training manager for Xerox Corp. Mike does podcast production for his job. 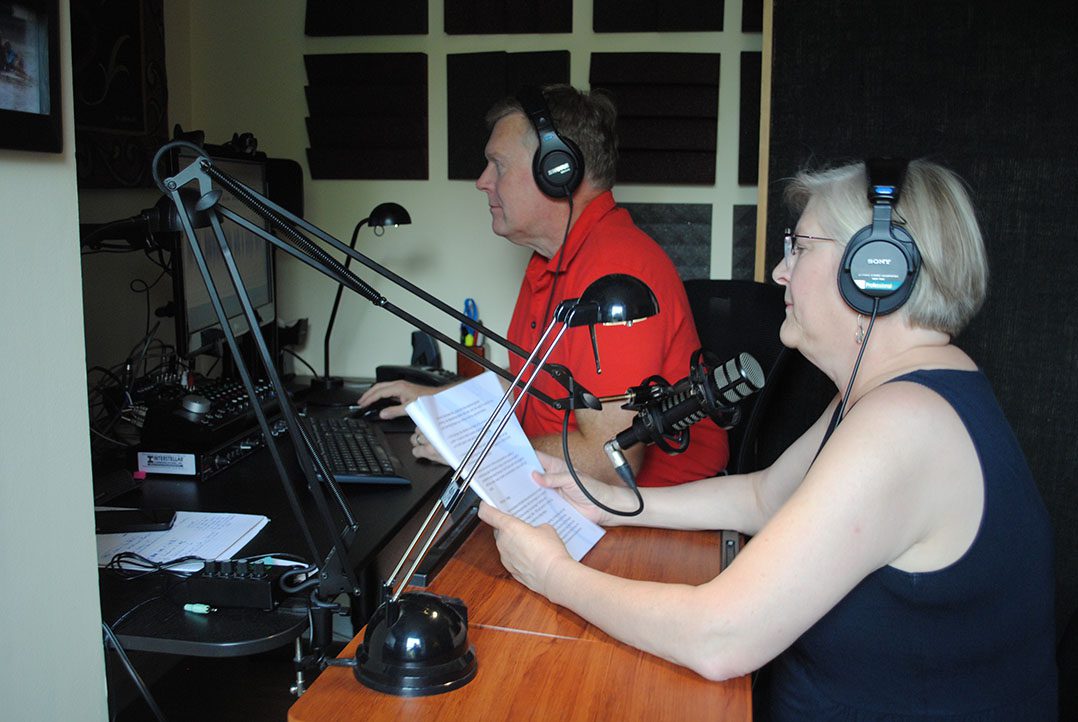 Morgan said the podcast is a true labor of love because the podcast doesn’t make money and it actually costs money to produce.

“We’ve not figured a way to make it marketable at this point,” Morgan said. “I enjoy doing it so much.”

“I’m at the point in my life where I just want to do things that I like,” Morgan said.

She has published eight books, primarily children’s books under her previous first name of Stacy.

Morgan produced a blog for 52 weeks about different ways to worship and a podcast to go with it.

Morgan had grown up with a strict Baptist background and has since changed some of her views on religion. She said she felt a name change was appropriate, too, legally changing her first name from Stacy to Emily in 2014. Morgan said she now attends an Episcopal church.

The Morgans met while working for their public radio station at Western Kentucky.

“I started doing local television in a very small town when I was 15 years old,” said Mike, who did voiceover work when his children were young.