A Noblesville teen will appear this week on CBS Sports as he vies for a national bowling title after recently winning the 2018 Indiana State High School tournament.

Nathan Smith will compete during the Aug. 6 televised broadcast at 8 p.m. 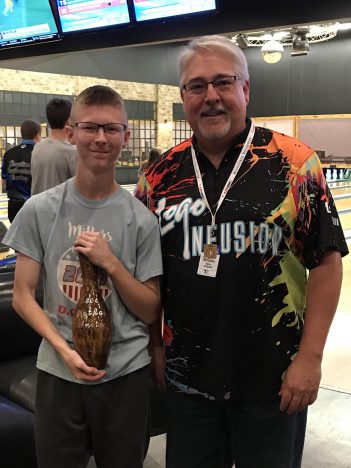 Smith, 16, is a junior at Noblesville High School and has been bowling since age 4.

“My dad plays an important role in my career,” Smith said. “I remember when I first started bowling, I wanted to spin the ball like him. Sadly, I was too weak to spin it with one hand, so I (started) using two. My dad has been my coach for the last 12 years and I would not trade him in for anyone else. While my dad coaches me, my mom is always giving me moral support.”

Smith’s home bowling center is Pinheads on Ind. 37 in Fishers. His league average last season was 247.

“In addition to having one of the highest averages of any league bowler at Pinheads, Nathan also bowled a 300 game and earlier in the season had an 804 series,” said Kevin Archuleta, one of Smith’s coaches.

During the Aug. 6 competition, Smith, who is in third place, will bowl in a stepladder format with a chance to win his first national title at Junior Gold, which was held last month in Detroit.

“The Junior Gold Championships is an annual national tournament for the top male and female youth bowlers in the United States,” Archuleta said. “The tournament has eight (age) divisions (for boys and girls). Making national television is every competitive bowler’s dream, so this is pretty amazing.”