You are at:Home»Current in Fishers»Fishers Cover Stories»Unmanned: IoT Lab to conduct first Festival of Autonomy

Contrary to popular perception, unmanned machinery and self-driving vehicles aren’t necessarily things of the distant future. Much of the technology is on the immediate horizon, according to Indiana Internet of Things Lab Executive Director Jason Pennington.

“Autonomous and semi-autonomous technology will continue to develop, so we can either choose and learn about this and educate and take advantage and be involved, or choose to argue if it’s a good thing or bad thing and let it happen regardless,” Pennington said.

That’s why the Indiana IoT Lab, 9059 Technology Lane, will conduct its first Indiana Festival of Autonomy from 9 a.m. to 4 p.m. Aug. 17. The event will feature exhibitions such as robotics, drones, self-driving vehicles and other unmanned machinery. Much of the event will focus on educating young residents. 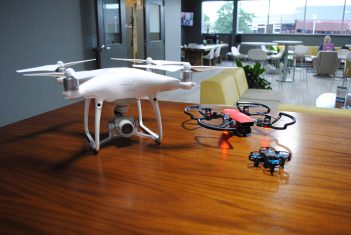 An example of some of drones that may be on display at the Indiana Festival of Autonomy.

“It’s a big part of our mission, overall. If you think of the last eight years, what we’ve done at Launch (Fishers) and also at IoT is to engage earlier and earlier, and that is to stimulate creativity and interest in the next generation,” Indiana IoT Lab founder and CEO John Wechsler said. “If you’re in third grade and you end up here and see an autonomous vehicle or a drone doing something cool, that’s going to spawn some of those kids to potentially have interest in that career, which could lead them to higher paying (jobs) or more significant roles in society.”

The festival is a two-day event, though only the Aug. 17 portion is open to the public. On Aug. 16, the Association of Unmanned Vehicle Systems International will conduct its quarterly meeting at the IoT Lab. The Aug. 16 event will include a panel with experts on topics like vehicle-to-vehicle connectivity and vehicle-to-infrastructure connectivity.

Wechsler said he wants to create a framework for future events, although nothing is firmed because he isn’t sure about AUVSI’s schedule for upcoming meetings.

“We hope it’ll grow into a template we can replicate,” he said. “When we set out, the mayor and I, eight years ago, our overarching vision was to make technology and innovation a dinner-table discussion in Fishers,” Wechsler said. “We want families to engage in this, so kids can ask parents and siblings can ask older kids what they did in their innovation class at HSE or what they did in their entrepreneurship class at Fishers. When you have youth engaged in this stuff, it’s amazing what they can come up with.

“Our hope is they continue to chase that innovation as they go off to college. The earlier we can engage on those discussions, the better off we are.”

The event is free. For more, visit indianaiot.com. 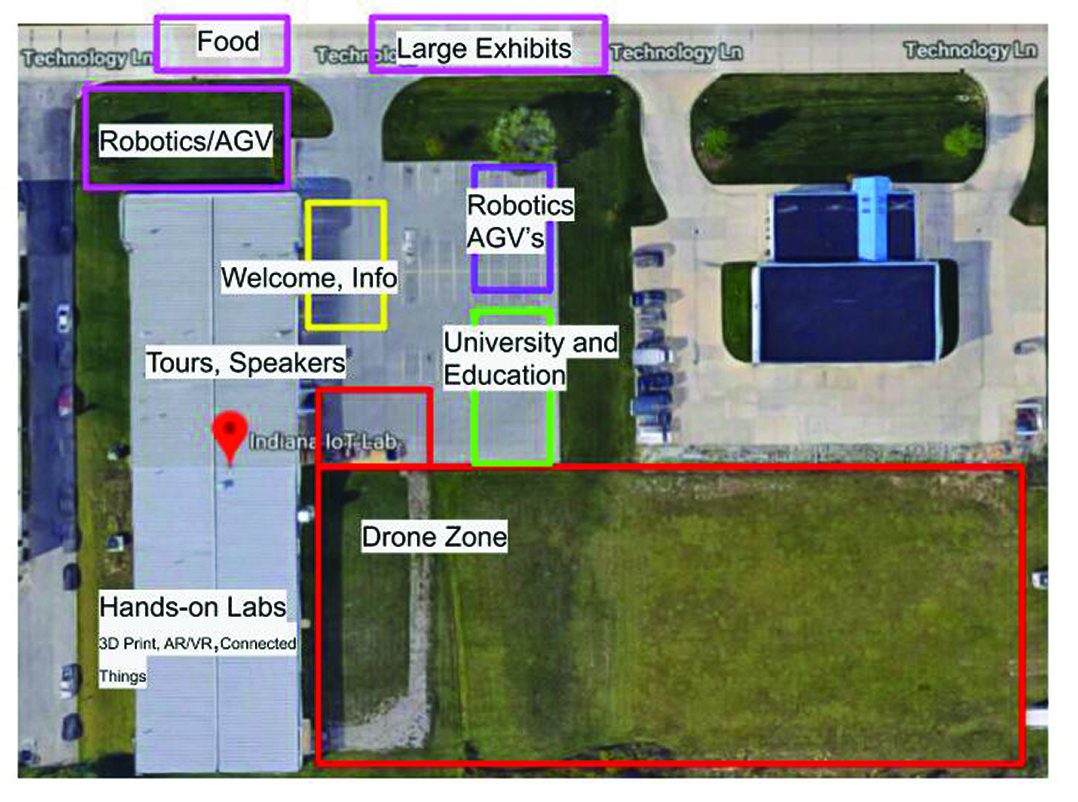 A map of the event. (Submitted image)

Available activities and displays at the Indiana Festival of Autonomy

Some activities and displays at the inaugural Indiana Festival of Autonomy will include table-top exhibits within the IoT Lab, tours of the IoT Lab demonstrating automating a home for convenience, drone workshops and more.

“We are going to have a netted, aerial sky gym for the kids to fly drones in this netted area,” IoT Lab CEO and founder John Wechsler said. “They’ll just be able to get in and fly a drone for a few minutes and experience that.”

The DANNAR, a mobile battery pack, will be on display as well.

“It’s like the size of four Hummers stacked together, but it’s a giant battery,” Wechsler said. “Primarily, what they’re known for is disaster response. They can come in, plug in and power a whole little village with this battery pack. They’re based in Muncie and it’s a really cool rolling battery pack.”