Becoming a top 10 finalist for the Songbook Academy was a thrill for Cynthia Kauffman, but there was something even better. 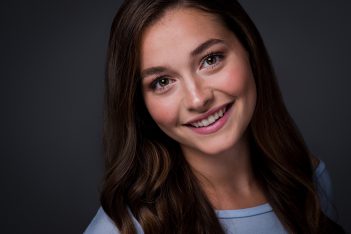 “The best part of my week was meeting so many new friends and people that I will be able to network and connect with throughout my entire performing career,” Kauffman said. “Everyone was so talented and brought things to the table that helped influence me and made my performance the best it could be. The most important thing I learned is that being yourself in your career is most important. You must embrace your talents and not let anyone tell you what you can and can’t do.”

Kauffman, a 2019 Zionsville Community High School graduate, was named a top 10 finalist for Songbook Academy and performed July 20 at the Palladium at the Center for the Performing Arts in Carmel. The top 10 are chosen from 40 students nationally, who attend the week-long summer intensive music program.

Kauffman, who also attended the Songbook Academy in 2017, said she learned so much more in his second visit.

“I came in at the beginning of the week lacking so many of the things they were looking for, and by the showcase (July 18) I had grown more than I thought possible,” she said. “Going through the program two years ago was an incredible experience, but this year I seemed to learn so much more and really was able to take in all of the notes given to me.”

“Performing on the Palladium stage is an absolute dream for any performer,” Kauffman said. “The sound quality in the hall is so perfect, it almost makes you sound 10 times better than you actually sound. Though the hall is gigantic, there is an intimate feeling about it, making it so enchanting to be able to sing to 1,200 people while feeling as though it’s just you.”

Being able to interact with Great American Songbook Foundation founder Michael Feinstein was special for Kauffman.

“Michael is such a wise and talented performer, so being able to talk to him and receive feedback from him was so special,” Kauffman said. “Although he is a famous person, he has such a genuine and kind demeanor that make being in his presence a little less nerve-racking.”