“A Chorus Line” gives Madeline Hatfield the opportunity to put all she learned to the test.

“It’s the most challenging I’ve done so far,” Hatfield said. “It’s the fact that you have to be a true triple threat, singing, acting and dancing all at the same time.” 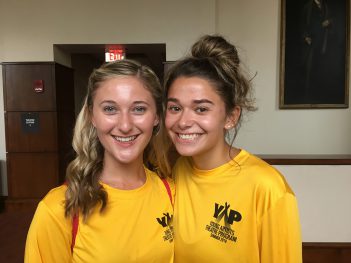 Hatfield plays Maggie in Civic Theatre’s Young Artists Production of “A Chorus Line” July 25 to 28 at The Tarkington at the Center for the Performing Arts in Carmel.

“The challenge is really rewarding,” said Hatfield, a 2019 Carmel High School graduate who will major in musical theater at Western Michigan University. “She has the really great moment in a song where she is singing with two other girls about how being in the ballet helped them in their childhood with different kinds of problems.

“Mine is about how my parents had me to save their marriage and it didn’t end up working and my dad left.”

Hatfield and Elie Anania, who will be a CHS senior, both participated in the YAP’s “Guys and Dolls” in 2018.

“She’s a very strong girl on the line,” Anania said of her character, Val Clark. “She had to do a lot to get where she is and succeed in musical theater. It’s very challenging, especially for the 17 of us that are on the stage for 95 percent of the show because we don’t have time to get water or rest our bodies. The show is very demanding, physically and mentally.”

“A Chorus Line” is a concept musical with music by Marvin Hamlisch and lyrics by Edward Kleban. It opened on Broadway in 1975 and was made into a movie in 1985. The story, by James Kirkwood Jr. and Nicholas Dante, focuses on 17 Broadway dancers auditioning for spots on a chorus line. It is set on a stage during an audition.

Anania was familiar with the show and its production. 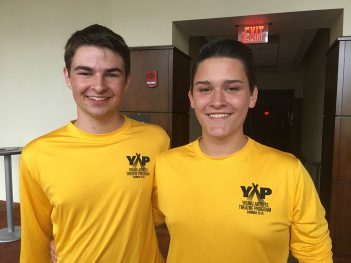 “I was really excited when they announced they were going to be doing ‘A Chorus Line’ because I think everyone in the musical theater business can relate to this show in a type of way,” Anania said.

Matthew Clark, who will be a Zionsville Community High School senior, is portrays Don Kerr.

“Don is laid-back. He likes to have a lot of fun in whatever he does, which has been a lot of fun for me to do,” Clark said.

There is a good deal of intense dancing, Clark said.

“There are some pretty hard vocals and acting is difficult in some of the different scenes,” he said. “It’s definitely testing me. I’ve grown over the summer.”

Clark is in his first year with Civic Theater.

“I’ve actually only done one other show for my school, ‘Mamma Mia!’ last fall,” he said.

Clark switched from band to choir when he got to ZCHS.

“I learned that I loved performing,” he said. “I decided on a whim to do my school show and then I wanted to do more and more of it.”

Charlie Steiner, who will be a ZCHS sophomore, played the Beast in “Beauty and the Beast” in a Christian Youth Theater production in June. He has been doing CYT shows since age 10 and is in his first year with YAP.

Steiner plays Alan DeLuca, who is at the audition with his wife, Kristine.

“She is played by Katherine Patterson. She is wonderful to play alongside and play off each other,” Steiner said.

Steiner said he is stronger in singing than acting and dancing at this point.

“This show you do have to be the best triple threat you can,” he said. “There is hardcore dancing and there are scenes where you have to act the best you’ve ever acted.”

Emily Tzucker, a Carmel resident, is the director. She is a professor in the Ball State University theater and dance department.

“We have some incredibly talented kids and they are doing professional-level choreography and singing,” Tzucker said. “They’ve worked really hard at developing adult characters.”