You are at:Home»Current in Westfield»Westfield Community»City of Westfield to build trail tunnel at 161st Street

The City of Westfield is expediting plans to construct a tunnel at the 161st Street crossing of the Monon trail after a pedestrian was struck by a vehicle at the intersection July 11. The pedestrian suffered non-life threatening injuries. City officials are moving forward with local funds after having twice been denied federal funding. 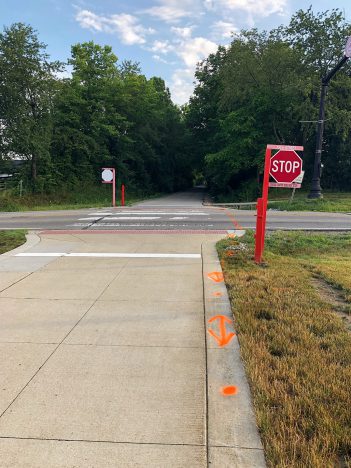 A pedestrian was struck by a vehicle July 11 at the Monon Trail and 161st Street. (Photo by Anna Skinner)

When U.S. 31 was constructed, in anticipation of the tunnel project, a concrete slab was poured on piles which will serve as a bridge for 161st Street above the tunnel. As a result, 161st will remain open during construction.

“We are entering the process of design and with the plan to construct the tunnel as soon as we can,” Public Works Director Jeremy Lollar said. “There’s a whole process that comes along, the design process, the right-of-way acquisition process, bidding, utility relocation and construction.”

City attorney John Nail said city officials will look into acquiring funding from other sources as long as it doesn’t delay construction.

“Our priority is to get this done and try to get other funding sources, but if not, the mayor sees it as a priority,” Communications Director Vicki Duncan Gardner said.

The deadline to request federal funds from the Indianapolis Metropolitan Planning Organization is this fall. Duncan Gardner said moving ahead without federal funding is not a knee-jerk reaction to the pedestrian accident.

Despite stop signs on the Monon for trail users, Westfield Police Dept. Chief Joel Rush reminds trail users they must stop at the crosswalk.

“Trail users are reminded that they have to stop at all trail crossings, proceeding only when both directions are clear,” Rush stated.