You are at:Home»Current in Carmel»Carmel Community»‘I Grew Up in Carmel’ Facebook group to hold reunion

Darron Chadwick had a different intent when he created the “I Grew up in Carmel” Facebook page in January. 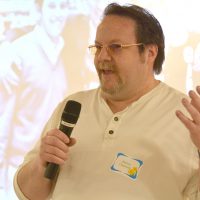 “My grandmother (Edna Askren) passed away (in 2006). I inherited all of her stuff and was trying to figure out what to do with it,” Chadwick said. “I listed it at garage sales and it wasn’t working. I had tons of stuff. I started this page, and within a week I had a thousand followers. You don’t really want to sell it at that point. It blew up to five thousand members in two months. It was a rocket ship. They talked about the history of Carmel. It was very nostalgic.”

Chadwick said he never got a chance to list things before the page took off, so he decided to keep his grandmother’s belongings.

The Carmel Clay Historical Society is sponsoring a reunion for members of the Facebook page, which now has nearly 7,000 followers, along with anyone with a Carmel connection who would like to meet with others to reminisce. Chadwick said someone recommended a get-together on the page. CCHS Executive Director Debbie Gangstad came up with idea to use it as fundraiser.

Those stopping by the CCHS Monon Depot from 11 a.m. to 4 p.m. Aug. 3 and making a $5 donation to CCHS will receive a wristband valid for deals from merchants, including Bub’s Burgers, Sun King Brewery, Mudbugs, Agave Bar and Grill, Donatello’s Italian Restaurant and Bazbeaux Pizza.

Among the items Chadwick has is a 1942 calendar from O.W. Nutt, a hardware store that also sold furniture.

“It’s things like that and matchbook covers and recipes,” Chadwick said. “It’s been a good thing. There are lots of stories there that I didn’t know. It’s interesting to see people connect through Facebook but in a different way. They have been able to reconnect.”

Chadwick, 54, lived in Carmel before his parents moved to Fort Wayne prior to entering middle school.

“I would come to Carmel every summer to stay while in school,” Chadwick said. “As soon as I graduated from high school, I moved right back here because I just loved it here. I’ve lived in Carmel on and off for 30 years.”

Chadwick and his wife, Jennifer, live in Carmel with their son, Connor, 17, and daughter, Jadyn, 13.