You are at:Home»Current in Fishers»Fishers Cover Stories»The face of addiction: HSE grad talks recovery, damage from heroin use

Chad Tarbutton always said he wouldn’t try heroin. But ultimately, he did.

The former three-sport athlete graduated from Hamilton Southeastern High School in 2008. Now 29, he said a few years ago he thought wouldn’t make it to 30.

Tarbutton was first introduced to drugs when he broke his hand at 17 playing lacrosse. He was prescribed strong painkillers, and that’s when he said his addiction problem started — a problem that would inlcude a rehab stint at Fairbanks treatment center at age 19.

“Ever since that day, I never felt genuinely happy as a kid,” Tarbutton said. “I felt something off, like I wasn’t comfortable in my own skin, but I’ve got this secret weapon. If I’m too anxious to talk to girls, I can use that. I dabbled a bit here and there.”

At 19, Tarbutton was attending Ball State University when an older friend offered him a small blue pill.

“He just told me it was a painkiller. It was Oxycotin. I took half of that,” he said. “I remember that night more vividly than any Christmas, birthday, reunion. It was like, ‘Oh, my god, this is what I’ve been waiting for.’ My body was starving for that.

“Deep, deep down I knew I was in trouble. It becomes (habitual) most days and then (you use) every day.”

From that point, Tarbutton began experimenting with other drugs – cocaine and pills.

“It started ramping up really quickly until I was about 23,” Tarbutton said. “I was always the guy who said, ‘I’ll never do heroin.’”

But that changed when Tarbutton attended a party, and same friend who gave him Oxycotin, offered him a pill full of powder, which he snorted. Although no one told him it was heroin, he had a feeling.

“I didn’t know what it was, but (deep down) I knew,” Tarbutton said. “To be brutally honest, I had a good idea.”

THE DARK SIDE OF DRUG USE

Tarbutton was first injected heroin when he and the same friend met at a house in Anderson, where his friend shot up in the bathroom. Around that time, Tarbutton had started dating a girl who also used heroin. His friend told him he was wasting the drug by snorting it.

“My disease got to where the heroin stopped working, so I was desperate to try anything like cocaine and stimulants,” Tarbutton said.

The high would satisfy him for 15 seconds, and then he would crave more.

“It’s like chasing the dragon. You’re trying to simulate the first high because every one after that is not near as good,” he said.

“I’ve had a gun pointed at me (by) a dealer. This is what the drug does to you,” he said. “It was over a $40 bag of cocaine. I stood up and was in his face. I was so stupid. That’s how important the drug is to you. That’s the power of addiction.”

THE ROAD TO RECOVERY

The first time Tarbutton went to Fairbanks for recovery, he hadn’t tried heroin. He went because of his addiction to pain pills when he was 19. He participated in the outpatient program and returned at age 21 for the same addiction, only this time as an inpatient. The program was from seven to 10 days, a duration Tarbutton said was way too short for his addiction.

The first time Tarbutton tried to rehab from heroin, he enrolled in a 30-day inpatient rehab program in Minnesota, followed by a stint in a sober living facility at the center.

“It was good, I just wasn’t ready. That was better (than Fairbanks) but it was really expensive,” he said.

Tarbutton was clean for nearly four months but relapsed again. He returned to the Minnesota program a second time and maintained sobriety for about six months. He then spent time at a sober house in Nashville, but he eventually relapsed and overdosed. 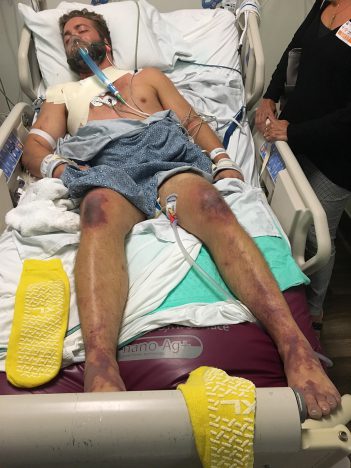 Chad Tarbutton spent nearly 40 days in the hospital after struggling with pneumonia and then overdosing. (Submitted photo)

Tarbutton then enrolled in a recovery center in Arizona for 45 days. From there, he transferred straight to a rehab center in California and participated in a 5-1/2-month treatment program. He stayed clean for 1-1/2 years but fell in with a bad crowd and had a two-week relapse. He also battled pneumonia. He said his friends found him passed out in his apartment with seven drugs, including heroin, in his system.

Tarbutton had sepsis from the pneumonia. He said drug usage lowered his immune system, which prevented his body from fighting off the pneumonia. The sepsis almost killed him, and he spent nearly 40 days in the hospital.

Tarbutton didn’t need to go to a center for treatment. That was the last time he used heroin.

“I had learned so much out in California and had done so well and had a foundation for the first time in my life. I knew what to do,” he said.

When his kidneys were well enough, he returned to Fishers and has been in recovery for 21 months, his longest-ever stretch since his first addiction. When he left the hospital, Tarbutton only weighed 138 pounds. Now, he weighs 215.

Tarbutton said he went to all those different states because he wanted to find a long-term program that worked.

“I was desperate to find any type of long-term treatment,” he said. “Every time it had gotten bad and I just wanted help. I was never court-ordered. I was really seeking for help. The recovery here in Indiana is crap. Ten days is not enough. It’s not even close.”

Tarbutton recently bought a house in Carmel and owns the lawncare business Yardvarks Lawn Care with his father, Todd. 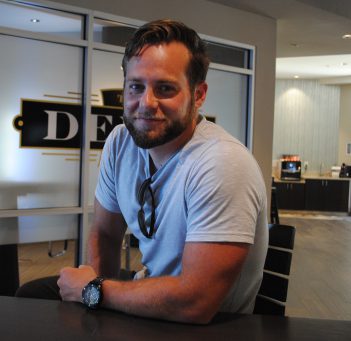 Chad Tarbutton, an HSE graduate, struggled with heroin addiction. He’s been in recovery for 21 months. (Photos by Anna Skinner)

Now that he’s in a successful recovery, he wants to help other struggling with addiction. He plans to become a certified sober coach.

“You get a call from the hospital or paramedics after overdoses, somebody sober comes to meet (the patient) and help guide them to treatment,” he said.

Tarbutton said he doesn’t believe it’ll be difficult to be around others struggling with addition while he’s sober.

“It’s actually beneficial for recovery. The new guys in meetings are the most important and get treated like gold,” he said. “It helps us remember how (bad) it was. It puts you right back there. You immediately step into gratitude.”

Tarbutton’s long-term goal is to open a step-down treatment facility in Indiana. Addicts in recovery can spend a year or two at the facility in sober living.

Tarbutton also plans to contact local lawmakers and talk about the importance of establishing step-down facilities instead of inpatient programs that only last seven to 10 days.

“California was the only thing that worked for me. I needed an intense, long-term treatment,” Tarbutton said. “You can’t use hard drugs for years and years and then expect to be clean in 30 days. That’s why recovery rates are so low because our treatments aren’t adequate.”

Some states are considering legalizing marijuana as an effort to manage pain for addicted to pain pills, but Hamilton Southeastern High School graduate Chad Tarbutton, a recovering heroin addict, has a different view.

“My opinion is a drug is a drug. For me, the only people that have had true success stay completely abstinent. I don’t drink or anything,” he said. “I don’t drink. It lessens your judgement, you’re not fully yourself, not fully in your right mind. For me, I need every line of defense. (Smoking marijuana) would counteract everything I preached with attacking this (addiction) physically, mentally, emotionally and spiritually. I go to church, I go to therapy. Every week I go to meetings. I’m a sponsor, all that good stuff.”

Tarbutton said he does support the use of CBD products because they are not mind-altering.

One of Tarbutton’s friends, Brooks Butler, agrees with Tarbutton that legalizing marijuana is not a good idea.

Himself a recovering addict, Butler grew up in Indianapolis and attended Cathedral High School and then Indiana University. He lives in Costa Mesa, Calif., where he owns the Gratitude Lodge, a six-bed detox and residential facility. Butler has been sober since Jan. 1, 2016.

“Marijuana legalization, I would not recommend that for anyone,” Butler said. “Because as a drug addict or an alcoholic, as soon as you are taking something that alters your mind, you have no idea where that’s going to go. I’m not saying 1 out of 100 or 1 out of 500 can’t do it, (but) I’ve seen it over and over thousands of times of people who said, ‘Oh, well, I just started smoking weed.’ Well, you started smoking weed and 20 days later you have a needle in your arm.

“Marijuana maintenance is not going to work for the majority of people because you are altering your mind and you really have no idea where that’s going to go.”

Butler also agrees with Tarbutton that West Coast treatment programs are better than those offered in Indiana.

“The quality of care for clients is just exponentially better in California,” Butler said. “California has been doing it way longer and we know it works, and I feel like Indianapolis is just so far behind. Everybody seems to have to leave the state to go get sober, and that’s a sign that treatment is not what it’s supposed to be.”