You are at:Home»Current in Carmel»Carmel Cover Stories»Shark!: Carmel videographer’s ‘terrifying’ footage to air on National Geographic

Craig Capehart caught the scariest moment of his life on camera.

The Carmel resident was in an underwater shark cage near Guadalupe Island off the coast of Mexico when a great white shark approached. Without warning, it charged, shoving most of its upper body through a gap in the cage bars. The shark thrashes, attempting to free itself, before eventually succeeding and swimming away. 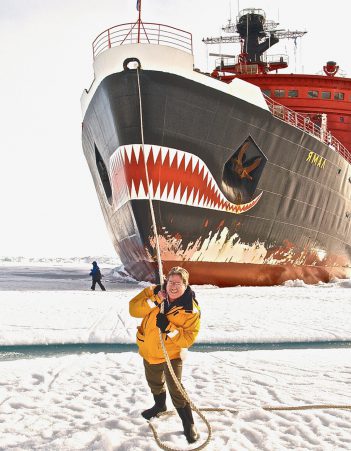 “It’s a big animal, and there’s four of us in the cage,” Capehart said. “What could we do? All I could think was that if it gets completely into the cage, I was going to die. It would have knocked the regulators out of our mouths. It only lasted a few seconds, but it was really terrifying. It’s the most terrifying thing that has ever happened to me.”

The moments Capehart captured were so compelling that National Geographic reached out to him and bought the footage.

“As soon as I saw the footage, I knew I wanted it in the show. First of all, the quality is outstanding. User-generated footage isn’t always great quality, but this footage is HD, the water is clear and the camera is relatively steady, given what’s happening,” said Casey D’Ambra, a producer for National Geographic Channel and Nat Geo WILD. “Also, the video captures a once-in-a-lifetime event. Luckily, no humans or animals were injured, and we get an up-close view of a creature that few people have the privilege to see.”

The footage aired in May on an episode of “Eyewitness Shark Attack” and will be included as part of Nat Geo WILD’s “SHARKFEST” at 9 p.m. July 29.

Capehart, 67, has always been passionate about travel. As a child, he journeyed with his parents to various destinations outside the U.S. His career, which included jobs in international business, finance and law, necessitated a good deal of travel around the globe.

It wasn’t until Capehart retired, however, that he learned to scuba dive because he wanted to explore coral reefs. He began filming his experiences on inexpensive cameras. In time, his abilities improved with his technology.

“I started diving at the same time Go Pros came out, and at that time, they didn’t make them waterproof,” Capehart said. “I wasn’t going to spend thousands of dollars on expensive equipment. It was just by chance that as I improved, Go Pro improved, and pretty soon I’m making pretty nice videos.” 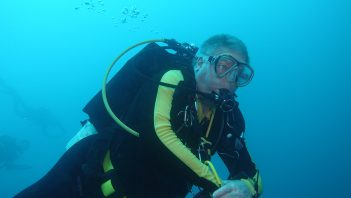 Capehart has now captured photo and video footage of animals in their natural habitats all around the world and sold his work to various outlets. Some of his videos, such as one featuring a manta ray mysteriously patting his head, are whimsical. Others, such as the footage he captured of humpback whales leaping and splashing off the coast of South Africa, are more awe-inspiring.

Capehart has shot wildlife footage from the Galapagos Islands to the North Pole and has developed a following on his YouTube channel, which has thousands of subscribers and approximately 100 videos.

Despite his adventures, Capehart said his life has never been more simple than it is now.

Check out the footage of a great white shark attempting to enter an underwater cage at youtube.com/watch?v=mD1l0zIdD3A&feature=youtu.be. Visit Craig Capehart’s YouTube channel at youtube.com/channel/UC-u9Hoq9KKnIsIPL8tx96Yg. 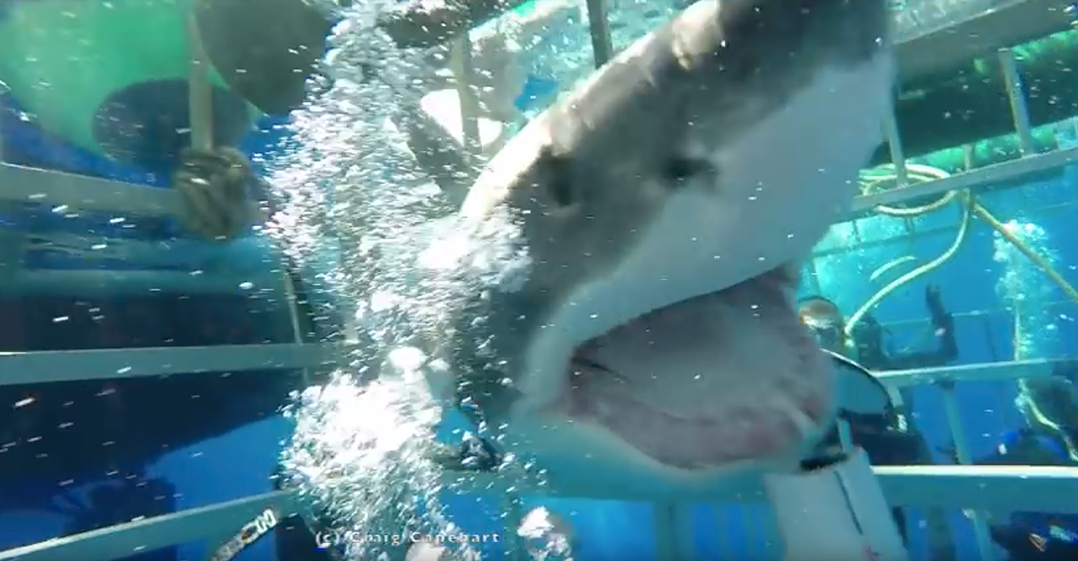 A shark attempts to enter an underwater cage. (Screenshot from video by Craig Capehart)

A look at shark encounters

What happens during a shark encounter?

To cage dive with sharks, participants need to be comfortable with scuba diving and own diving gear. The cage is usually supplied by a wildlife encounter company. These companies are popular with ocean tourists. Once divers enter the cage, they are lowered to a depth usually between 6 to 30 feet. In many cases, sharks are lured near the cage with chum—a mix of fish blood, oils and meat.

How safe are the cages?

Shark cages are quite sturdy, usually made from stainless steel to withstand the force of sharks ramming into or biting them. Gaps between the bars are too small for large sharks to pass through. Some cages are also draped in protective mesh.

Why do sharks sometimes behave erratically?

Cage diving is usually safe. However, as Craig Capehart’s footage shows, sharks are wild animals and can behave unpredictably. A “feeding frenzy” occurs when one or more sharks become overly excited by the scent of surrounding food. Frenzied sharks may attack one another or anything nearby—including cages. However, sharks are almost never able to penetrate the cages, which is what makes Capehart’s footage unique.