You are at:Home»Current in Carmel»Carmel Community»Fountains of Hope celebrates 10 years of providing clean water globally

Bill Farrar has made it his mission to provide clean water for those in need.

Fountains of Hope, a nonprofit the Carmel resident founded, celebrates its 10th anniversary July 9. Fountains of Hope grew in the wake of the January 2010 Haiti earthquake, which was followed by a cholera outbreak in October 2010. 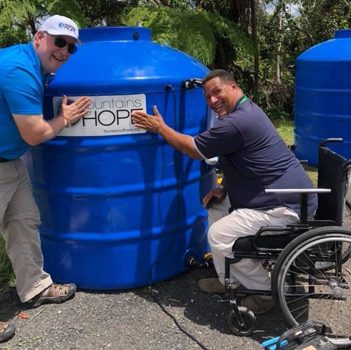 Farrar, executive director for the Carmel-based nonprofit, said Fountains of Hope has installed more than 210 purifier systems in 15 nations and the unincorporated U.S. territory of Puerto Rico.

“It’s amazing to see how the Lord has worked through all of this,” Farrar said. “Literally millions of people have gotten safe water to drink with each system we install. The water purifier is much like a municipal water treatment facility.”

Fountains of Hope’s system can purify 3,600 gallons per hour, taking only 3.5 hours to purify enough water for a village of 500 people for a month. It uses a cup of salt, water and a 12-volt battery.

Farrar said the nonprofit primarily works in Puerto Rico and the nations of Haiti, Kenya, Uganda, Zimbabwe and India. He has spent a lot of time in Puerto Rico since Hurricane Maria in September 2017.

“It still has a lot of problems where a dam burst during Hurricane Maria,” Farrar said. “There is water rationing to many of the northwest towns in Puerto Rico as a cause of that. Many towns are getting their water every other day or every third day. We’ve set up several emergency water stations where people can get water on an emergency basis if they need it.”

Farrar said Puerto Rico is now better prepared for when the next hurricane hits.

Farrar, who has an aviation technology degree from Purdue, installed his first purifier after working in the aftermath of Hurricane Katrina in 2005. He then continued working for a purifier manufacturer.