You are at:Home»Current in Noblesville»Noblesville Cover Stories»Stars and Stripes: Fourth of July festivities return with more in new location

In recent years, Noblesville residents have made their way to the Noblesville High School campus for the annual Fourth of July festival, which offers an array of food, live music, vendors, kids activities and more.

But this year, long-time residents will recognize the festival’s return to its historic spot – Forest Park.

The change was made for a simple reason. The intersection adjacent to the high school at Field Drive and Cumberland Road is closed for construction of a roundabout. Because parking is much more limited at Forest Park, the city will be running shuttles to and from offsite parking.

Aside from location, other changes include an earlier start time for the parade downtown and longer festival hours – 4 to 10 p.m. –  for an overall larger event, which includes an expanded kids zone with an entertainment stage, inflatables, jugglers, balloon artists, face painters, crafts and magic and comedy shows. A 300-foot zip line beer garden a Ninja Warrior course, cornhole and an Indy Eleven activity also are part of the offerings.

Returning attractions include a live music stage with the Milwaukee-based Road Trip as the headlining band, a food court, U.S. Army demonstrations and more, all culminating in the fireworks show at 10 p.m. Fireworks will be launched from Forest Park Golf Course. 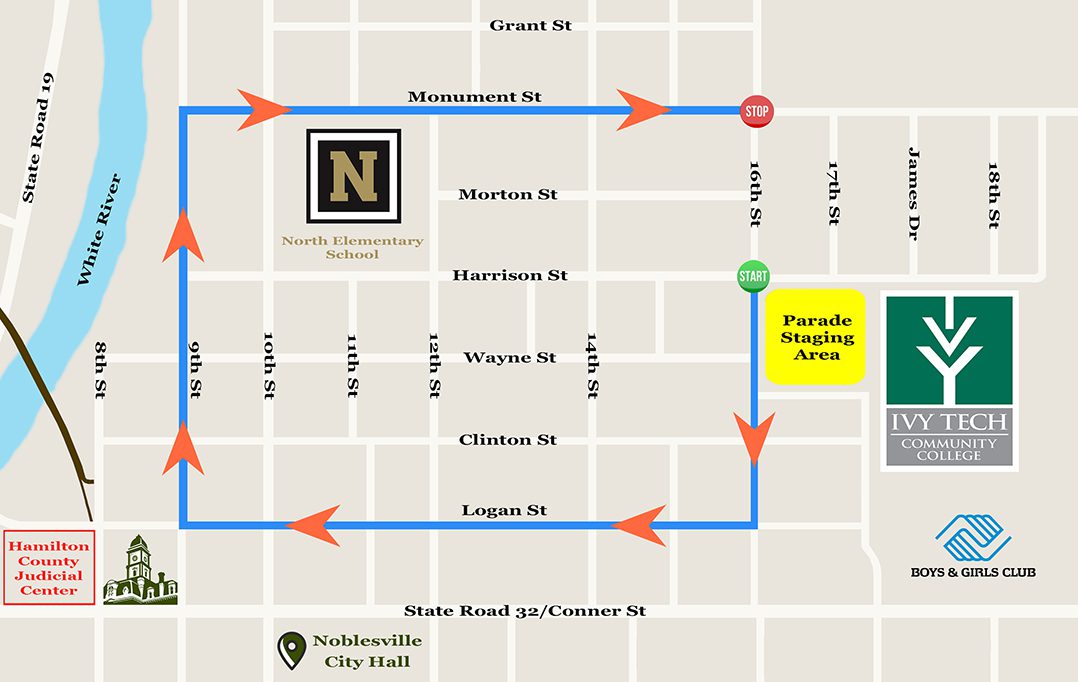 The parade will begin at 16th and Harrison streets and will travel south on 16th Street, west on Logan Street, north on Ninth Street, and east on Monument Street, ending at 16th and Monument streets. (Submitted map)

Two hours before the start of the festival at Forest Park, the annual parade is set to begin at 2:30 p.m., running through downtown streets. The parade staging area is at 16th and Harrison streets, where it will begin and then travel south on 16th Street, west on Logan Street, north on Ninth Street and east on Monument Street before ending at 16th and Monument streets.

“We have many new opportunities for the public at this year’s festival and activities for all age groups,” festival co-chairmain Mike Hoffmeister said. “It will be great having the train return to the park with Nickel Plate Express offering low-cost excursion rides throughout the event.”

Thirty-minute rides will be offered from 5 to 8 p.m. during the festival.

“The Nickel Plate Express team is looking forward to rolling into Forest Park for Fourth of July festivities,” said Dagny Zupin, Nickel Plate Express communications and program director. “The City of Noblesville has planned an exciting day for families and we’re happy to be a part of that celebration.”

Tickets are $10. Children 4 and younger are free. Tickets can be purchased in advance at nickelplateexpress.com or onsite. 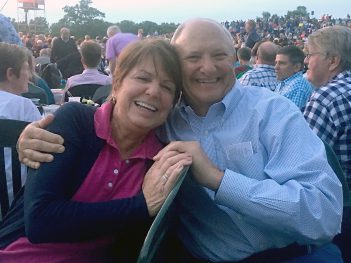 City of Noblesville officials recently announced that this year’s Fourth of July Parade grand marshals will be Luke and Sally Kenley.

The Kenleys are 1963 Noblesville High Schools graduates who grew up one block away from each other on Maple Avenue. They ttended Conner School and junior and senior high school together. In high school, Sally was a cheerleader and Luke was president of his class and captain of the football team.

Luke is known for having served 25 years as a state senator in District 20, covering all of Noblesville, Westfield and parts of Fishers and Carmel. He retired in 2017. He also was Noblesville’s city court judge from 1974 to 1989. He has been a board member for the Noblesville Boys & Girls Club for more than 40 years. In 1967, he graduated with a degree in economics from Miami (Ohio) University. Two years later, he joined the U.S. Army and served three years.

Sally is an artist. A member of the Hamilton County Art Association, she was admitted to the Hoosier Art Salon. She helped establish the strings program and orchestra at NHS and was a founder of the Stephen Ministry at First United Methodist Church, where she is a member. She graduated from Butler University in 1967 with a degree in elementary education.

“Sally and I are thrilled to serve as grand marshals,” Luke said. “We love Noblesville and its people. It maintains a special charm with its blend of new and old, and it was one of the best decisions of our life to move back. It wasn’t much of a decision, since it was the only place Sally wanted to live.”

The Kenleys married in 1967. They returned to Noblesville from Massachusetts in 1971 after Luke graduated from Harvard Law School.

After working two years in an Indianapolis law firm, Luke joined his father, Howard, Kenley’s Supermarket. At the time, Kenley said the job was transitional, but he stayed 25 years to grow the business from one store to two with nearly 200 employees.

“Luke and Sally have deep roots in our community and their impact is felt not only in Noblesville but throughout the state,” Mayor John Ditslear said. “Luke was very instrumental in getting the Ivy Tech Campus in Noblesville and continues to guide the Noblesville Boys & Girls Club Board, proving his dedication to that organization and the city.”