You are at:Home»Current in Carmel»Carmel Community»‘Grammar Guy’ receives $2,000 grant to write book

Curtis Honeycutt’s eventual goal is to make his living as a writer.

A $2,000 grant from the Indiana Arts Commission might help him take his next step. 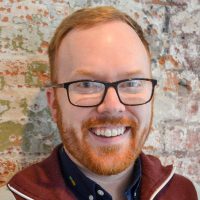 Honeycutt, who writes the Grammar Guy column for Current Publishing Inc., recently received a grant to attend an Erma Bombeck Writers’ Workshop April 2-4, 2020, in Dayton, Ohio. The late Bombeck was a humor columnist.

Honeycutt, a Noblesville resident who is communications manager for Nickel Plate Arts and Noblesville Chamber of Commerce, is hoping that will help him complete the first draft of a humor book on grammar.

“The more I write my column, the more content I have for my book,” Honeycutt said. “I’m trying to repurpose my column to read like a cohesive book.”

Honeycutt started writing weekly columns for Current newspapers two years ago and has added newspapers since then, including the Fort Wayne Journal Gazette and The Times of Northwest Indiana.

“I do have a literary agent shopping the book to different editors around the country,” he said. “Hopefully, the book will be published with a traditional publisher, and those processes tend to take a long time.”

Self-publishing is an option if that doesn’t work out, he said.

As part of the grant, Honeycutt also plans to hold a grammar party, either at Nickel Plate Arts or another venue in Noblesville, in May or June 2020. He plans to invite editors to appear on a grammar panel.

“It would be cool to have for word nerds and grammar people who all enjoy that at the party,” Honeycutt said. “I like to have the editors speak on the state of newspapers, which I think is an interesting topic.”

Fritz received a grant to produce a new, evocative and lively production of Anton Chekhov’s ‘Uncle Vanya’ as a live-cinema experience. During the run of the show, he will hold three free workshops for Indiana artists and students to learn about the new bridging of cinematic technology and theater.

Wilson plans to develop drama-for-literacy activities to teach reading skills to kids ages 4 to 18. The activities will be tested as part of the Page & Stage Theatre Co. Summer Camp at Logan Street Sanctuary and a Drama-for-Literacy Open House, and it will be shared with teachers.

Brinkman will use the grant for watercolor and acrylic classes and supplies to produce 100 paintings capturing a motif inspired by 100 poems she has written. The endeavor was inspired by her study of a 13th century book by a Chinese poet, which consists of a series of 100 poems on his 100 plum blossoms paintings.

Wagner will write 10 new persona poems in the voices of historical men and women with Indiana connections. They will be included in her next poetry collection, tentatively titled “Mordecai ‘Three-Finger’ Brown Tells All and Other Voices from Indiana History.”

Barbee’s project will commission and perform works that reflect Indiana’s rich spirits history. The tuba-euphonium quartet genre desires attention, and with the inspiration of corn, whiskey, experiences and good friends, the project will provide an element to bring people closer together and understand how classical music can enrich lives.