You are at:Home»Current in Carmel»Carmel Community»Carmelfest: Guitar jam session returns

It’s had a few different names, but Benito DiBartoli is glad the jam session is back. 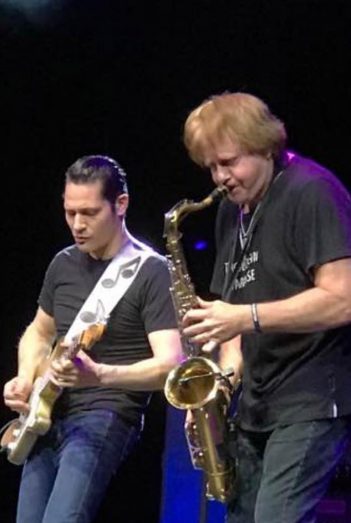 “It left me confused and sad on July 3,” DiBartoli said.

DiBartoli will play in the Hoosier Blues Jam from 8:15 to 10 p.m. July 3 on CarmelFest’s North Stage.

DiBartoli helped develop the concept with former CarmelFest entertainment director Brian Carriger. It has previously been called Guitars and Stars and Guitarmel-Fest as well as other names.

“We just put together some of our favorite guitar players, and the plan was everyone does a short set of their own music and at the end we have the jam session,” DiBartoli said. “Each year the sets have been getting shorter so the jam can be longer.”

DiBartoli, a Greenfield resident, is the guitarist for Eddie Money, who is taking a break after heart valve surgery.

Carmel resident Doug Henthorn, who has been a regular in the guitar event, played a Tom Petty tribute set at CarmelFest last year. The jam is always fun, Henthorn said.

“I’ve been part of CarmelFest for about four years doing the all-star jam thing and always look forward to it,” said Henthorn, who recently released a new album.

DiBartoli said fans of the individual performers get a thrill seeing all of the performers together.

Tad Robinson, a harmonica player and singer from Greencastle, said it is cool the Indianapolis-area blues scene performers all come together for the Fourth of July.

“After all, what could be more all-American than blues, roots rock and soul blues?” Robinson said. “This year we plan for there to be more cross-pollination with each of us doing some sitting-in on each other’s set.”

Robinson said the event gives him the opportunity to present a short set of his tunes backed up with some of his “favorite blues guys in town.”

Robinson said all the performers are busy with their own bands and projects.

“For CarmelFest, we get to come together with musicians that we dig and admire but don’t get to usually hang with,” Robinson said.

Among the other participants will be Indianapolis guitarist Paul Holdman.